Animal And Wildlife Challenge For October 2022

Finally got something done for this month. 9x12 on Bristol with Art Markers. 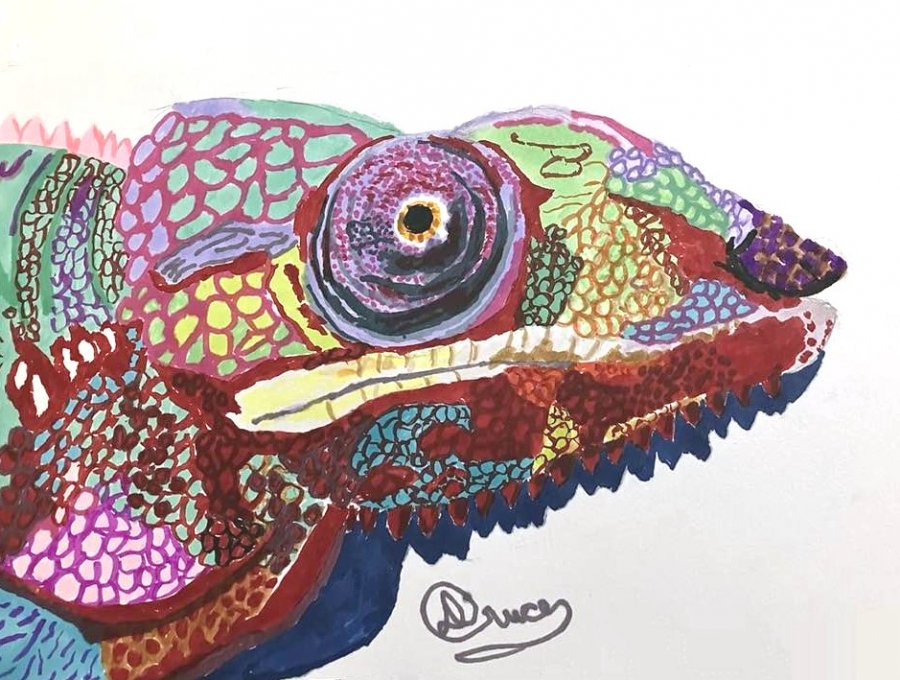 Joy: I LOVE your bat! The expression on his face is wonderful!
C

Queen: Your lizard (or whatever he is) is awesome! So colorful and alive - superb!

Deb, that is great! Very well done.
CaliAnn, thank you!

Joe - Lovely lion. The fur is good in the coloured version and the expression is nice.

Joy - Great bat ! All the ink drawings this month are really making me want to try ink !

Here it is - the end of the month again!
Great work everyone !
Thank you for hosting, CaliAnn.
Cheers,
Patricia

joe1It said:
I finished drawing and coloring the cat.
I also made another one, the bat,
I have to find the photo, I thought I saved it on the computer, after I add it, thanks for references and to see.
del gato I have another photo prior to this, I do not know whether to put that too

What a lovely little character. I like it, Joe.

Your sketches have character, Joe.

Another great sketch. Love the colouring.

Joy said:
Although I have done some nice pieces in the past (that were done on Arches and took weeks), my work has been really difficult lately. Using cheap sketchbook paper in an attempt to work quickly and loosen up backfired. So often I see challenge photos on forums and feel they are too complicated or not good lighting, and then am really impressed by what others can do with them. Interpreting a subject is very difficult for me. Working on things that are not worth saving is too time consuming so I am going to try to just start over more often.

This is with a biro, or ballpoint pen, which I have never done before. It is on Canson 140CP watercolor paper sketchbook, 7 x 9. The reason it is a peach and yellow color with some scoring was b/c I had tried a challenge for another thread of some pumpkins on that paper. The attempt was so terrible I wiped the paint away and just thought I would do this quickly (for me, anyway) for Inktober and the Wildlife Challenge. It took less than 90 minutes. I also posted this in the Inktober thread.

Thank you everyone who participated - excellent work by all!

Thank you, Penny and Joe.

Joy - great work on the bat with the ball point! I think ballpoint is my favoirite thing for sketching with, I seem to fo much looser lines than I do with anything else. I like your re-use of the paper too.

Deborah - I just love how colourful this is. Great eye!

Please choose from the photos provided on the first day of each month to create an artwork
in any medium.

You can use the photo’s to create any kind of artwork that you like .

Please use only the photo’s provided.

Please don't tell us which photo you chose before the 20th !!

You can continue to post your artwork from the 20th until the end of the month.

We hope you enjoy the challenge, we're looking forward to seeing you !

Like to watch the posts on forum. These are all wonderful. So many different interpretations.