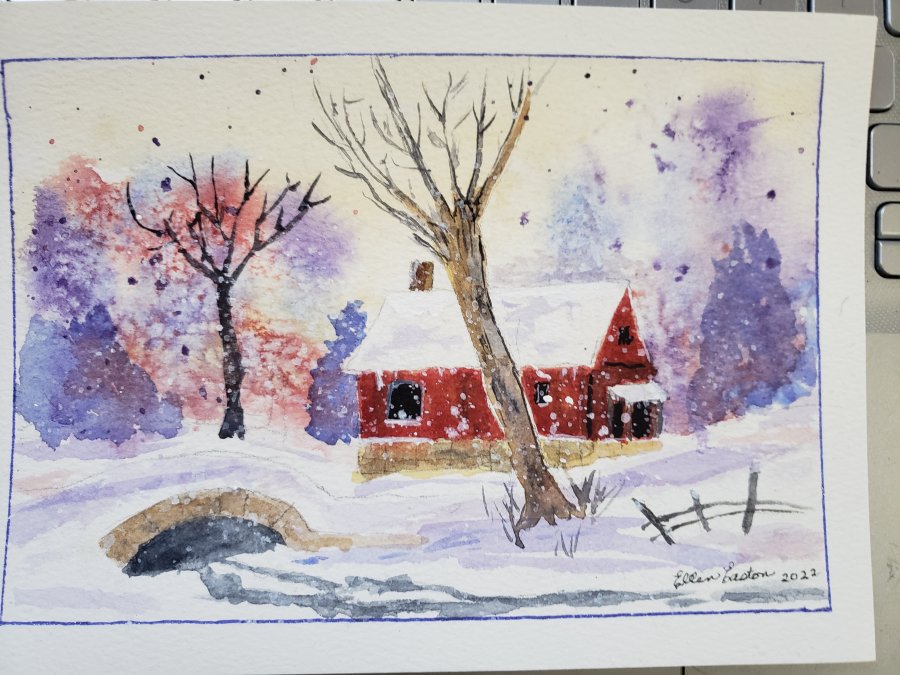 I hope I did this right. I haven't done pictures here at Creative Spark before. This was done from a Youtube video by Paul Clark. I tend to be a realistic painter but I've been trying to learn to paint more "watercolor-ly" and loosely. I painted this as one of the cards I'll give my neighbors at Christmas because I always do handpainted Christmas cards for everyone.
Last edited by a moderator: Aug 29, 2022
G

Well, somehow I got that darned thing posted twice! I don't know how to take out the second photo. Can a mod help me?

By the way, I'm Ellen E over on the other forum.
R

Hi, Ellen! Looks like they are getting a wet snow! (Large flakes, clumped together.) Hope there isn't a freeze over night – all the wet snow will turn to ice.

I see my post went twice, too. Must be some kind of glitch? I hope the mods can fix it.

Thank you very much, Rich! I'm kinda pleased with my result in this painting.

And that snow that's wet and then forms ice is definitely what we usually get here in Oregon down in the valley. I'm in the mountains now so it's less likely but still happens sometimes.

Hi Ellen - your painting turned out great! I think you achieved the loose feel you were after. It's a very sweet winter scene.

I'm not sure why you were getting double posts.

But it's all fixed.

Nice! I'd be pleased to receive such a card at Christmas

I think it's lovely. You definitely captured the cold winter atmosphere. I love the way you painted the falling snow.
C

I love it! I would love to get such a Christmas card

That's so pretty and it will make a great Christmas card! Looks like you might have sprinkled salt to make the texture in the trees? It's a nice effect!
G

Triduana, I used diluted white gouache spatter to depict the falling snow. I also spattered with some of the tree color. That's what Paul did. He spatters almost all his paintings. I guess he just likes the effect but I decided to do it, too. lol

Donna, yes I did sprinkle salt on the trees. That's what Paul Clark did so I did too. I also sprinkled it on the trees at the right but it didn't do the same for some reason.

Thank you CaliAnn, laika and Terri. I appreciate your positive comments. I haven't painted since last year and I'm finding that it's somewhat of a challenge to pick up the skills again. I got covid last year and I've been dealing with it ever since. Had to have a stent and two balloons in my femoral artery and I've had two blood transfusions so far----they're still trying to figure out why I keep going so anemic.

This is so lively and will be a wonderful card. I know what you mean from not painting. We lose the touch and forget what we know that comes automatically from practice and painting often. I don't see any forgetfulness here. Hope you feel better soon and they find the problem.

An exciting snow scene, Ellen, so keep up the good work! I hope your health issues resolve soon. Painting is such a good therapy as it transports us to another realm.

This has so much character. It's really great. Nice job!

I’m sure the persons lucky enough to receive your cards treasure them and I can see why!
G

You're all so encouraging! Thank you very much!

I was over at a neighbor's house a few weeks ago and she had my last two years' Christmas cards still up on her wall. I also talked to the lady right next door a couple weeks ago and she said she's still got hers hanging up, too, bless her heart.

This year I'm painting my cards a little big larger and writing my holiday greetings on the back so they can have a real picture for their wall if they want to keep the card. They'll be winter scenes but not with anything obviously Christmas/New Years about them on the front. I've painted some elk so far, but I've got plans to do others of more of the animals we see around here. We have a cougar who has come right into the park several times over the last few years and a black bear with her babies. Also spotted skunk and opossums and lots of bird species. Frogs and snails and all kinds of spiders and mice and even (unfortunately) rats sometimes.

Our cougar (a male) hasn't been around much this past year that I can tell. We see his tracks where he drinks from the creek if he's around. He comes right into the park sometimes. Last year he strolled right through under my son's window and was captured on a game camera. I've attached the picture. It was right before daylight about a year ago. I think he's gone further up into the mountains because of the fires this year but he's been seen up the road at a friend's place so he's not far away.

I name photos some stupid stuff, don't I? lol I named the picture "cougar wade" but Wade is my son's name and I was just naming the photo whatever came to mind, I guess, at the time.

Incredible animals. We want to set up a cam here too. We have mountain lions and many bobcats here.