Who here writes/is a writer?

Olive, I think you'd make a great nonfiction writer, even if you just wrote about your thoughts on any subject, say like diary entries. Your thoughts on any given subject really. It could be autobiographical or not. You have a great casual speaking voice. This is why I was urged to write my memoir, even though I really wanted to TRY to write it like a "writer." When I tried to do that, I was told it stank up the universe, so I rewrote it a bunch of times in my natural voice. I'm still not happy with it and I never will be, but I know at least two people liked it.

I've published a couple of short stories and a book of poetry, but I don't think the poetry was all that. I think if it didn't go with illustrations, I probably wouldn't have been able to publish it with the publisher.

I am not a formally trained writer (obviously), but I've been writing since I was a young teen. I took some community college classes in creative writing and English, but nothing big. I refer to the old Strunk and White for basic grammar and that's really it. If I don't know something beyond that, I Google it (or check the Chicago rules) to make doubly sure. Even the editors I've hired do not know everything about grammar rules and grammar/punctuation varies between America and the UK (though I write in American English), so even if something might be correct in British, that doesn't mean it belongs among a book in American English, which is a pet peeve of mine--not to sound snobbish. Or "snobbish". <--Incorrect. Ha.

I am now working on a new book about gender issues called Queer as Mud, which has been ongoing for a couple of years now. I don't know if I'll ever finish it, or if it's a work of fiction or nonfiction. Ha ha ha.

My poems barely rhyme, very rarely, except in the case of songwriting.

Once on WC a member made a really smart a$$ remark about someone's painting and where it should hang, and I just had to respond in some way so I wrote this:

I made a little painting,
Made it just for me.
I hung it in my outhouse
Where only I could see.
My neighbor stopped by
To sit upon my throne,
Saw the little painting
And wanted it for his own.
Now my outhouse walls
Bedecked with paintings are.
Take the one you like
Leave the money in the jar.

OliveOyl said:
I’m not a writer and never had any desire to do it other than the mundane ways I already do it. It’s weird, but I’m able to easily express myself when I “write out my thoughts.” It’s like a direct (and natural) beeline from thought to expression. But if somebody else said, “write a story about this particular thing,” my mind would go totally blank. That’s a type of pressure that makes my brain turn off, melt down, or fizzle away. Not sure WHY that is, but there it is.

I think about this often, because I talk to myself all day long. But when I’m talking out loud and in person to another person, thoughts don’t flow as easily outta my mouth. Especially, if I’m tired or distracted in any way, it takes great effort to communicate and make sense. It’s like I’ve gone too far inward to come outward with any sort of smoothness or grace. It’s when I feel most like an Italian Cave Woman...sort of grunting out words and stumbling through words and using my hands to pull the imaginary words out of the “talking system.”

I think that’s why I like painting so much.
It’s nonverbal.

And now...I’m tired of talking.
And you...are tired of listening.

You're a great writer.

they're dark… yet just poems

Carol and Ian...you are two of my favorite invisible online people ever but still, you’re both WRONG! Thanks, tho.

You know...I’m never sure if I should use the thumbs up thing or the face with the heart eyes. One seems smug and the other seems overkill. Where’s the simple “thank you” doohickey?

Maybe I should just find out how to add a few more doohickies.

Oh, what about the thumbs up icon though? Isn't that a kind of "thank you?"

Artyczar said:
Maybe I should just find out how to add a few more doohickies.

Oh, what about the thumbs up icon though? Isn't that a kind of "thank you?"
Click to expand...

Yes Arty, but it seems to be a sort of run of the mill thing, never exudes enthusiasm

. I agree with Olive about the other two. Olive I really enjoy reading what you write

O.O don't put yourself down. Your way of putting words together makes even the most mundane subjects fascinating to read.

I'm still trying to figure out how to add "reactions." I will have to ask Hannah later today. I'm not so smart when it comes to these things.

When my veterinary son was in community college, he took an English class for which one of his assignments was to write a short poem. He was complaining about having to do so, and I asked him what the subject had to be. He told me that he could write about any subject with which he was familiar, so I suggested writing about birds, or even more specific, .....a feather. Just to show him how easy that could be, I dashed off this little poem that I called, "Ode to a Feather".

Ode to a Feather

Behold, the noble feather, magnificent and fair
With one end stuck into a bird--the other, in the air.
To fondle one is such a treat, a bunch is better yet.
When overlapped upon a neck, they are so nice to pet.

When stuck up straight within a crest, they are a pretty sight,
When spread out in a wing, or tail, they show a bird in flight.
Now fish have scales, and cats have fur, but feathers grow on birds.
And, those upon my parrot are too beautiful for words.
M

When I was a young lad my father taught me a poem.

When I was walking with my uncle Jim.
Somebody threw a tomato at him.
Tomatoes don't hurt when they come in a skin.
But this one did, because it came in a tin.

I was awarded the 'Most Creative Writer' trophy in my final year of Highschool.
These days that talent is in the Titles I label my 'average' artworks with...which
if a half decent story is depicted, helps enormously to have my pics viewed as Art.

Dave you could do a painting to accompany Maybe's wonderful poem

Red-tailed hawk retrices (tail feathers). Belong to a falconer friend-- illegal to have otherwise except for rehabbers. 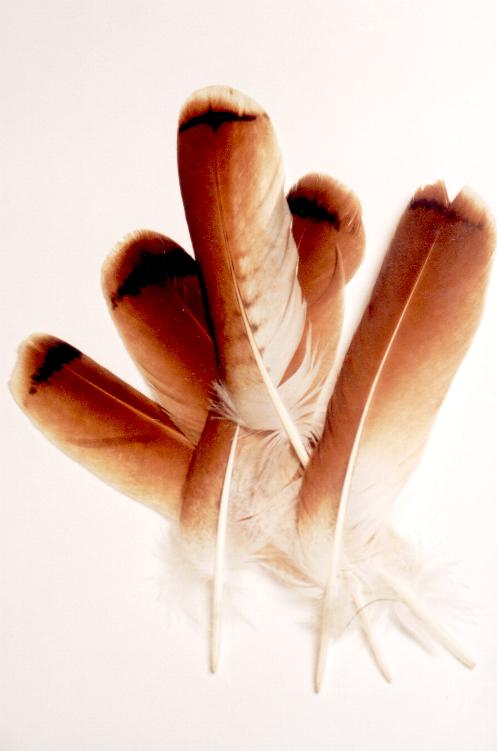 I've written a book about my 25 years owning and operating pawnshops. Met some odd birds there. I also write poetry . . .


Lay Thee Down
by ©Richard Budig

Her figure
sweet and tender,
plays among
moonbeams,
matching rhythms
of her lover
as he moves
below

Well, I originally didn't want any poetry posted on this forum anywhere. It can get out of hand, long, and frankly annoying. Everyone has very different tastes for this sort of thing, but here I am about to post one of my own anyway. It's an old one and not exactly typical for me either.

Otherworldly,
swelling up from the mud
a whispering rose bends toward a groundling
She asks,
“Where goes the happiness?”

A timbre passes through the ether
and answers,
“It’s shoved into bottles by miraculous elves
and they save it
for a distant afternoon.”

I hear the voices
and coalesce
“Yes,”
I speak into the dirt
lay onto my belly
and join the conversation.

“It appears
someone has stolen it and
run away—
it’s memory cast to the soil.”

The sweet pink rose questions
“Then where does love derive?”
A tree proclaims
it comes first without effort
It has always been.

Otherworldly,
swelling up in my thoughts
I think, sometimes
smiles
exist in a continual loop
We wait in quicksand
searching for rainbows in outer space
We wait for the forecast of rain
to drench us
in love and happiness and blood
all the while
humming over our ears we hum over our own ears
by the murmuring grass.
You must log in or register to reply here.
Share:
Facebook Twitter Reddit Pinterest Tumblr WhatsApp Email Link
Top