What are you working on?

Joce, your recent portraits have been blowing me away. This recent one is no exception. Love the tilt of the head and am interested in seeing the headdress and clothing develop. I'm intrigued!

A rabbit on the horizon? Well, all righty then - bring it!

Ayin - I LOVE your rabbit house! This is one of my favorites of yours. More houses with rabbit ears for everyone, I say!

Terri and Artyczar
Thank you for lovely comments on my sculpture !
Cheers,
Patricia

Desforges said:
I have a bunch of small canvases that I will use for portraits.
I started this with not much in mind. I have to redo that mouth.
8x10. I think that a rabbit is about to pop up.
View attachment 22337
Click to expand...

This is looking great. I like her expression !
Cheers,
Patricia

Artyczar said:
This photo of the rabbit house is really terrible, but I'm still working on this one in oil. I wanted to outline the windows with a tiny black outline. I tried it in paint, but I didn't have a brush small enough. Then I tried a micron pen, but that didn't work at all with the oil paint, so I'm just going to leave it alone. I may thicken up that middle white line on that center window and call it. Now I'm working on the mountain range.

I agree with Terri - I love this rabbit house !
Cheers,
Patricia

Artyczar said:
Sno and Joce, thank you for the compliments on the site I built. I appreciate it. Now I'm about to build another (more complicated one) for my other good friend. It never ends.
Click to expand...

That's what you get for being good at it. And BTW, I love the rabbit house as it is.

Thank you so much Terri, Patricia, and sno for the lovely comments on my rabbit house in progress.

Thank you Ayin, Sno , Terri and Terri for the positive comments.

Artyczar said:
This photo of the rabbit house is really terrible, but I'm still working on this one in oil. I wanted to outline the windows with a tiny black outline. I tried it in paint, but I didn't have a brush small enough. Then I tried a micron pen, but that didn't work at all with the oil paint, so I'm just going to leave it alone. I may thicken up that middle white line on that center window and call it. Now I'm working on the mountain range.

want to live there! Off the grid.
G

This year I'm starting my Christmas card project early instead of procrastinating till December like I've done the two previous years. And before that, I've got a couple or three other cards I want to work on for selected folks in the RV park where I live. One is a condolence card for a very dear gentleman here whose wife died in his arms recently. They'd obviously been devoted to each other for all their lives and he was dedicated to caring for her himself as she was on hospice in her last months.

The second person is a dear lady friend who has had MS and other serious medical problems. She was still able to walk but had lost lots of weight in recent months. She fell a couple of days ago and really injured her face and head. My daughter borrowed my wheelchair to take her back to her house. I've had to use that wheelchair myself because of my foot, but in the past week, the foot has finally returned to normal so I can walk on it again after months of having to stay off of it and I was glad she could use it.

I've had to be pretty much a shut-in for over a year now because of my own autoimmune issues as I tried not to expose myself to covid. But I got covid anyway last June and it's been a year of misery where I lost circulation in my feet and developed terrible skin breakdown and death of tissue. I had to go into the hospital in October----for that foot issue I thought----only to be admitted to the hospital for a blood transfusion that was more urgent than the foot, although they dealt with the foot too. I had become very anemic. I was referred to a vascular surgeon about my foot and ended up having to have a stent and two balloons in my femoral artery----covid the culprit. Covid has also caused a heart murmur that I have to have an ultrasound to learn more about and I have to be put under general anesthesia to have my upper GI tract and my colon scoped to try to see if there's some bleeding internally causing my anemia. I guess I'm one of those covid "long-haulers" we hear about.

But the reason I'm telling my covid woes is just to give background as to why I'm hand-painting cards. I don't go out and about except to the doctor and I have almost no visitors so the cards are my way of reaching out so my neighbors know I'm thinking of them and wishing them well.

Actually, there's a new resident here that I want to also make a card for, too, to welcome him. He's a "covid cadet" too, but with him the illness produced quadriplegia. He's worked very hard at trying to get better and is now a paraplegic. He has regained some use of his upper body. He wants to walk again but it's not looking as though that will happen any time soon.

Covid is a very complex and mysterious, sneaky illness. It's inflammatory and if there's anywhere in the body that's got any inflammation it will strike there, making it even worse. I had several areas in my body----vascular and other---and that's where the disease struck me. In many, many cases there's just no telling where a person will have that weakness where covid will strike. I've been immunized and my doctor adamantly insisted that I get boosters because if I get covid again, it will be even worse and will attack other areas of my body. Now I'm due for the second booster.

Sorry to chatter on and on. If anyone here remembers me as Ellen E at the Wet Canvas forum, you'll know I have a tendency to run on and on about stuff.

It's always nice to receive handmade cards, Ellen E. I'm sure the recipients of your cards will appreciate the thought and effort that went into them.

And Covid is still very much out there. I know a family of seven who recently got it even after being fully immunized. My betrothed has gotten pneumonia several times since having a severe case of Covid in 2020.

the girl with the faux-pearl 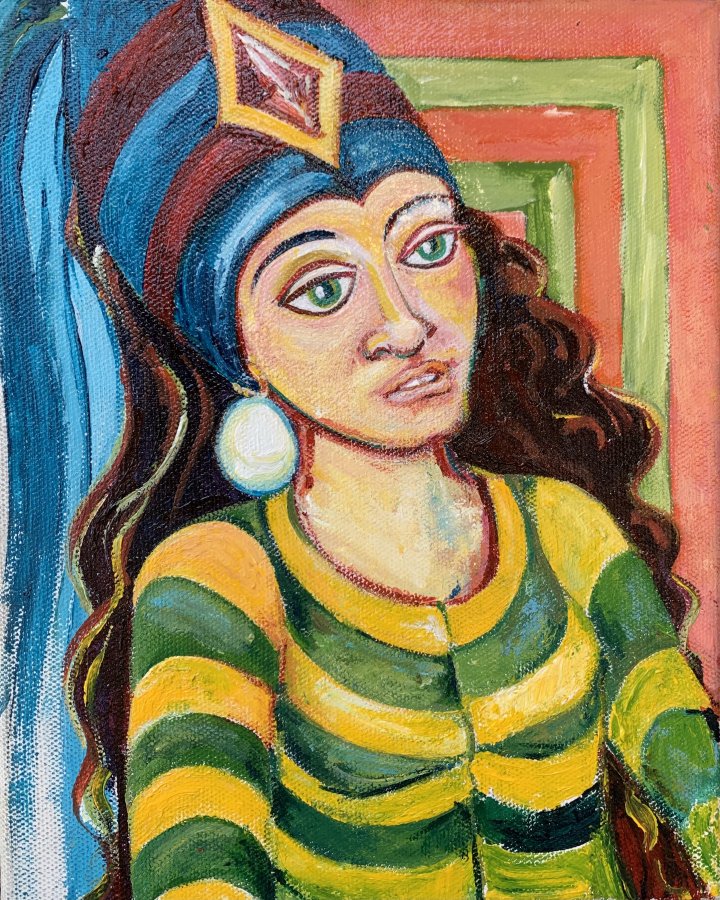 Heavy is the head that wears the pearl

Street Art on a sports ground. Pole #3 tells story of the area: flooding rains, bushfire and beautiful tall trees. Anew hours to go yet. And, I'll be working with some home schooling families tomorrow so kids can decornate the playground poles. 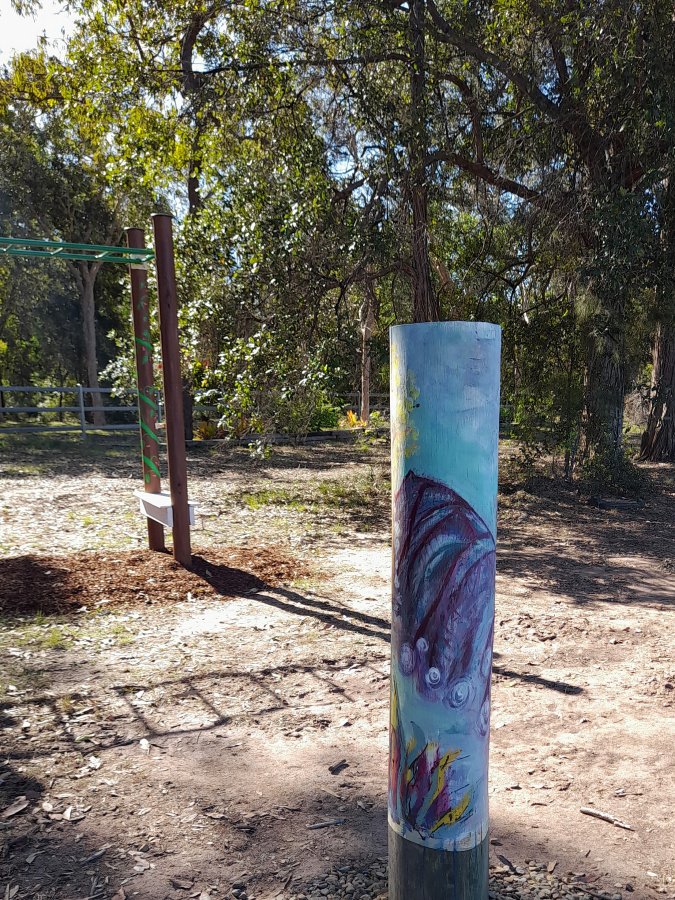 JennieJo said:
Street Art on a sports ground. Pole #3 tells story of the area: flooding rains, bushfire and beautiful tall trees. Anew hours to go yet. And, I'll be working with some home schooling families tomorrow so kids can decornate the playground poles.

This is very nice !
Cheers,
Patricia

Playing with colours
My greatest pleasure! 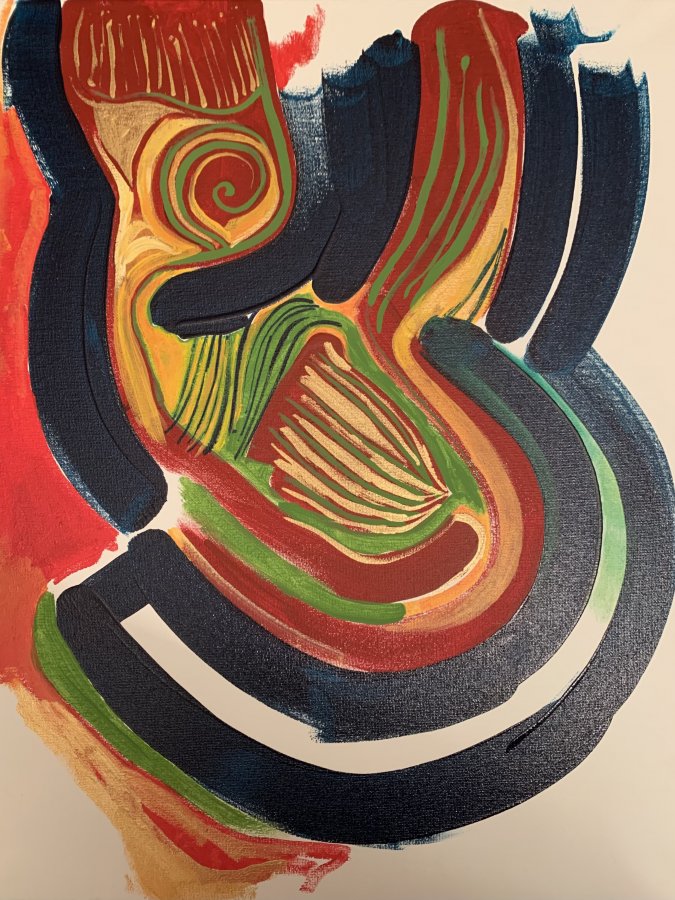 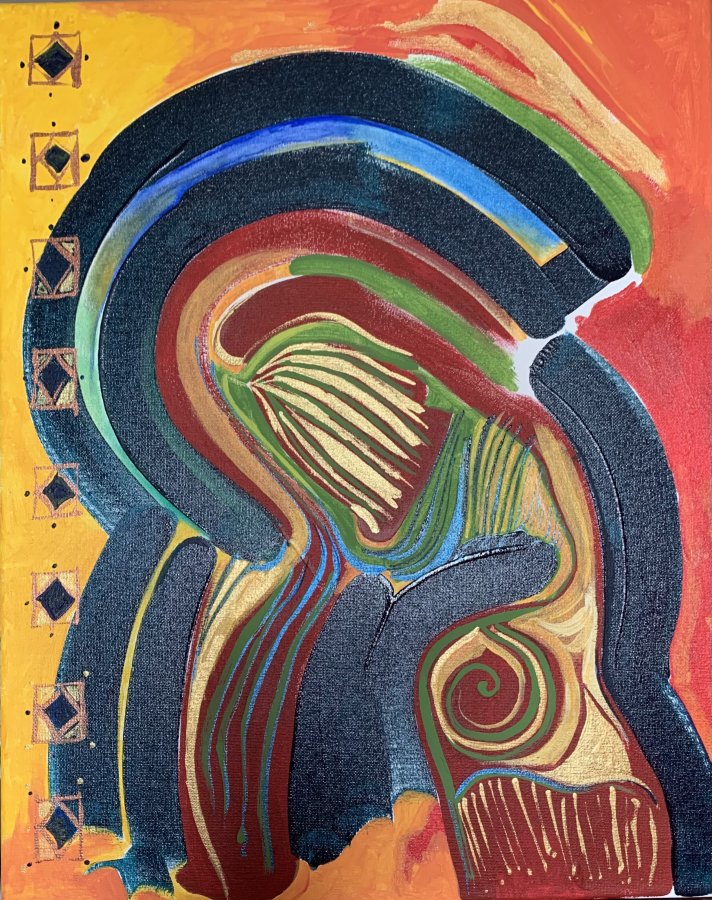 Thanks Patricia. Love working in the open.