What are you working on?

Comprehensive list of things I didn't get paint on today:


Behold my "studio". Is it not magnificent!? Oh man I envy you people with dedicated art-desks and rooms and such. Cross-legged on a corner of the bedroom floor for me!

ok so I bought 3 canvases at Hobbycraft, the kind that are on little wooden frames because I recently made the mental connection that a) my apartment has a picture-rail and b) you can hang these things up by banging nails into the wooden bit at the back and tying twine between. So now I want to hang things up.

The photo I am using is mine. I took it at my parents' place (they live on the coast I do not). It's a red buoy that was on the sand outside the harbour when the tide was out. I am very proud of myself for all the forward-planning I have been doing here. I went to the harbour and took the photo then did thumbnail composition sketches on-the-spot and then at home even did a preliminary watercolor sketch for values etc before trying the "real thing". Arting at this competence level was never possible for me until recently. So this is as far as I got today in a couple of hours starting from blank canvas, really I think it's almost finished but I'm going to let it sit and dry then take a long hard look at it and maybe put some fine details in before I call it done. I will take a clear picture and put it in the acrylic forum once it passes quality control.

You’ve got a good start on this so far.

I love this little piece so far drizzle.

Nice, drizzle. Yesterday (Monday) was laundry and other stuff, today is a bit more of that: putting stuff away, neatening up, and paying bills, crocheting, and of course, reading and napping. I'm tired already!
I really hope to get to paint. I have 3 oil studies going, one from a photo from a friend, two doing "lessons" via video, both challenges. And I found an old thread on wc re gouache I want to see about. I better get at it!

Been setting up a work space for Inktober. Plan is to do very small illustrations. I have this little photo album thing I bought in a charity shop (UK version of "thrift store") about a million years ago, and I would like to put it to use. So, index card size drawings that I can slip in there and have an album of tiny cute art to flip through. Cleared the table off, dusted everything (WHERE DOES IT COME FROM WHY IS THERE SO MUCH DUST) and put the tools out. Do it now = less obstacles later = more likely to do the work. I hope!
N

Working on the floor like that would do my back. I don't have a dedicated work space, unless, of course, one can count the bed one...

Well, I was planning to work on that big watercolor, but that didn't really work out. Instead, I tagged all the prices on the artwork I have displayed in my garage for the upcoming open studios event that's taking place here in my town through all the weekends in October. I've been stressing out about it, especially after one person has already had a sneak preview of it and I sort choked when she came. I didn't conduct myself very well.

Now I have to get ready/dressed to take a painting over to the big group show and pick up the signs to post around my neighborhood. Maybe, if I'm not exhausted, I can get back to painting today. It will be that or a long-ass nap.

Call it a power nap. It then becomes part of the process. 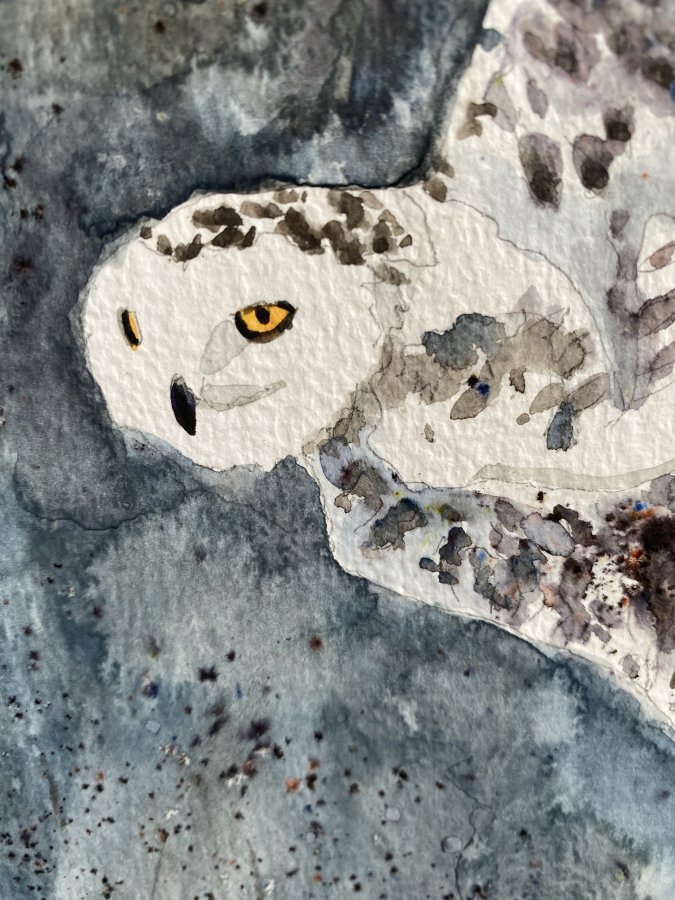 I’m working on this snowy owl.

Yesterday when I went to drop off the art for the group show and pick up the catalogs and signs for the open studios event, I discovered that my listing in the catalog was completely incorrect. I got so upset because this is the third mistake the organization has made specifically on my listing. I am now taking it very personally.

To make matters worse, when I brought it to the director's attention, instead of being apologetic (which I honestly wasn't even expecting really), she blamed me for filling the form out wrong. But I never filled out any forms because my intake was done over the phone. Someone else filled out the form while I told them how many weekends I wanted to participate. Then, I paid me fee by credit card, and of course, there was no misunderstanding in correctly understanding all those numbers to process that!

Sorry, just a bit peeved now. I'm not listed to be open most of October during the event. The directions to my studio are wrong, and my studio is not even on their map. Three important bits of information, as there are only four main things to know in the catalog: who, what, where, and when.

Also, when I met up with the guy who received my artwork for the show, he looked at my consignment sheet and said, "Oh you're Ayin." Really strangely. I was like, "huh?" He said he'd been talking to me through a lot of recent email. I was confused. Apparently when I thought I was talking to the director, sometimes it's really been him. But he said it all so strangely, like I was an infamous "problematic" person bringing these issues to their attention recently. But so far none of these mistakes are my doing. They keep saying they are very bombarded and busy. They are all volunteers and there's no way they can do everything that needs to be done, etc...

So today, I am down and out. I have to figure out a new way to promote this thing on my own, correctly, and get over this mysterious stigmatization I suddenly feel.

That is just horrible. Sounds ominous. They shouldn't promote the service if they cannot get the basics right. That is unforgivable. They may be volunteers, but you have paid for it.

❤ It's really reflecting poorly on THEM, especially since they're not even professional enough to admit their own mistakes!

There's no reason for you to let them make you feel so marginalized. Sounds like amateur hour over there. Iain is right - you paid a fee for their services, and they have failed on 3/4.

I doubt you're the only one who is getting this treatment. Who will want to participate with this group once word gets out? You shouldn't be left holding the bag. Maybe another conversation with the director is in order.

Thanks for the commiseration ya'll. I don't know how much of the word I'd want to "get out." I'm just venting here, but I'd feel bad if I told more people/artists on the tour. Only one close friend on the tour knows and she is also irritated with a lot of disorganization on their part. So yes, I guess I'm not exactly singled out. It just feels like it.

Having another conversation with the director only feels like I'd be adding more fuel to the first honestly. I have been so nice and it doesn't really matter as far as the liability factor goes. It's all via email and there's no way for that to get smoothed over, but maybe I'll meet her IRL at one of the events soon. Until then, I have to think about what my aims are for this event and try to strive for them.

I hope you're actually able to have some fun with it, too! It's a lot of work even when the organizers do a good job.

It is perplexing this happened to you. Artists are a strange lot! I always think others really do not like me when all I want is for them and us all to do the right thing. A good example today. Myself and two others are chairmen of our local membership show. I go early, bring a folding table and chairs to the college art department, get set up and ready by 2 p.m. the start time for the next 4 hours. Other two women did not show up. One of them came later to stay briefly then leave and other said she did not know she was supposed to be there when I texted. Only 1/3 of the members came and brought their entries. I should not take things personally but do.

Sorry to hear about all that trouble Artyczar I hope it will go well for you nonetheless.

I have a few things on the go. I'm set up for Inktober which begins tomorrow - though I'm considering not calling it "Inktober" for myself since the guy who started the movement has gotten scummy about it, trademarking the name and there was some drama over him plagiarizing for a book... Hm, "Drizzle's Ink Drawing Month" has a nice ring to it

2nd thing: I've also decided what my next canvas painting will be, I want to do something from the public garden where I do gardening volunteering. The group might be able to use it for social media stuff if it's any good.

3rd thing: I did an acrylic study today on a cardboard scrap which is planned to be one of four. Being a cash-strapped artist I appreciate that you can put acrylic on literally anything! I steal cardboard out of the apartment bins like an inspired raccoon, paint on them tie them together with twine then hang them up as rustic dangly decoration things. Example of a previous one - Betts Park set. Picked up stuff in the park took it home and painted it 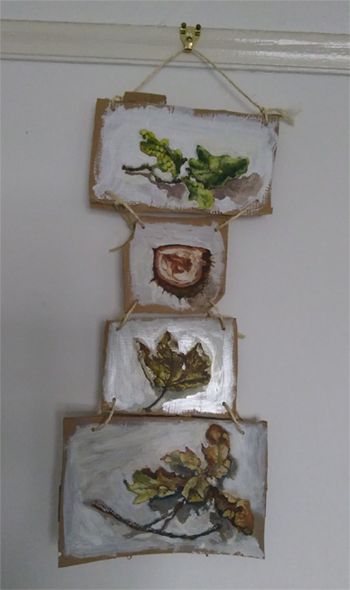 This set will be the Sweets Set and my first that I did today is a study of polo mints. Making sure everytime now to do a preliminary sketch with watercolor so I go into my work with more of a plan. There is a chocolate lolipop waiting in the kitchen for the next one, and the best part is when I've done the painting I will get to eat the chocolate. Now that's motivation
You must log in or register to reply here.
Share:
Facebook Twitter Reddit Pinterest Tumblr WhatsApp Email Share Link
Top