We’ve trained a neural network called DALL·E that creates images from text captions for a wide range of concepts expressible in natural language.

Or so they claim. Remarkable, because the imagery is AI-created and not merely found on the web.

I see people complaining that it will kill all human creativity, or put illustrators out of work. But I actually rather doubt that, based on the sample images they have on the website.

We’ve trained a neural network called DALL·E that creates images from text captions for a wide range of concepts expressible in natural language.

Or so they claim. Remarkable, because the imagery is AI-created and not merely found on the web.

I see people complaining that it will kill all human creativity, or put illustrators out of work. But I actually rather doubt that, based on the sample images they have on the website.
Click to expand...

I know this is an old post, but I wanted to talk about this and searched the forum for relevant posts. I just got access to DALL-E 2, and so far it looks like a really great resource for references for art. As I understand it, in the US, although there are ambiguities, most AI-generated images are in the public domain legally, so there's no reason they can't be used as reference materials for artwork (which is then owned by the artist, of course). (Obviously, if you tell the engine to use a copyrighted character or something, then that's not public domain.)

There are other AI engines available, Craiyon, Midjourney, Neural Blender, Nightcafe, to name a few. Some are free, some are paid. Anybody else using any of these as tools to create art? Even the free ones that create relatively small images (Craiyon) could be useful.

Edited to add: I first thought I might use the images more or less directly for print-on-demand, etc., but I don't think they're good enough for that. If I get a perfect answer to a prompt, I might only modify it a little bit, but I think they're all going to need modification to fit my vision for what they should be. (And then they're my images, of course, owned by me.)

You know, I played around at a site like the ones you mentioned (can't remember the name) and it kind of weirded me out. It probably would be a good way to generate ideas for projects as you suggest, but it actually felt alien to me in a way. It was amazing what it could generate from my suggested seeds, but I didn't play with it long enough to in any way bend it to my will. Did you experience any of the vibe I'm trying to describe? I'm glad that you brought this up, btw, and I'm sorry that I missed the original post from brianvds.

Of course I will revisit one of the engines/generators at some point, but I'm gonna have to think about how and why it made me feel a certain sense of twilight for human art. The machine was way too good at what it was doing.

One last observation: a lot of what I saw in the daily images boiled down to people trying to generate the perfect girl. Did you see much of that?

For me, the collage tool seems to hold interesting possibilities and I will have to play with it. I hope there is a function to randomize the placement of elements.

laika, it does feel alien, sometimes, doesn't it? I think it's because the AI doesn't know which elements are important and which ones aren't, at least in part. And also, it seems to make things the same that should be different. Different elements line up with each other when they shouldn't or they have the same shape or color when they shouldn't. I think it's really interesting.

I was generating some reference images for a painting yesterday, and the AI actually influenced my decision making in unexpected (but not bad) ways because it made some elements line up, and I couldn't persuade it to do otherwise, no matter how I changed the prompt words. I'm not ready to share those images until the painting is done, but I can show you what I mean on a little digital image I made yesterday.

See how the shrimp and the toes are the same color and shape in the unedited version? That's what I mean by unintended effects. This one was relatively easy to edit digitally for a marketable (Redbubble) image, but many aren't.

I wrote a short blog post about these images and AI (link to my site in signature), but basically, I don't think AI will replace humans ever. But they may make it easier for artists to create work or make artists more efficient in some way, which I guess could lead to more competition/fewer successful artists, but I don't really think that's how art works. Art is in the imagination, in the heads and hearts of artists. And somewhat in the aesthetics (composition, value, appeal, etc.). The rest is just tools, whether it's an Apple pencil or a Wacom tablet or AI or traditional media.

I guess some people are trying to make the perfect girl, but actually most of what I've been seeing on Reddit and Twitter (and on the AI sites themselves) are uncanny or spooky images, but the AI can make anything, and I'm not too concerned about what others are doing with it, other than to learn what I can from them.

I haven't looked at artbreeder closely. I glanced at it, but didn't have the time to sort out how it works that day.

Hermes, I'd love to see what you do with it if you do play with it!

Thanks, amo! I'm glad the AI didn't bother you
I was looking for a pic of a tower for something I was working on from Google Street View when I stumbled across artbreeder. I played with it for a couple of evenings and finally got a tower that was so much more beautiful, surreal, and fantastical than anything I could ever hope to paint. Part of what bothered me was that my input was actually negligibly minimal when compared to what the machine came up with. The AI was most definitely the clever and skilled one of the team. Sure, I got a great reference image, but I felt defeated before I ever picked up a pencil. Maybe I should have looked at it like going to a museum to study and copy from the masters.

It just occurred to me that we should have a challenge based on images generated by CS members working with their favorite AI art engines Now I wish I'd kept that Bruegel-the-Elder-on-DMT tower with its battlements floating majestically in the night sky.
Last edited: Jul 31, 2022

Always feel free to create any kinds of challenges you wish!

I'm not reliably here enough to create a challenge, unfortunately. I might participate in one . . . .

I looked at artbreeder, laika, and maybe I'm missing something really obvious, but it seems to be to be a LOT harder to use than the other AI engines I've experimented with. Maybe the results are awesome, but the learning curve seems steep. Then again, I didn't pay for access, and it does seem like some functionality is limited in the free version. And maybe it just works differently and my expectations are getting in the way. I'm not sure. But I'm not likely to give it a lot more time because I'm getting good results from the other sites that I'm finding easier to use.

I think this one from Craiyon is hilarious, so I'll share it. Not sure if it's art exactly, but . . . . the prompt is "home sweet home by hieronymous bosch"

amo said:
I think this one from Craiyon is hilarious, so I'll share it. Not sure if it's art exactly, but . . . . the prompt is "home sweet home by hieronymous bosch"
Click to expand...

That's a great example, amo! The AI comes up with something wonderfully strange with the merest of suggestions! And I love what it did!


Artyczar said:
Always feel free to create any kinds of challenges you wish!
Click to expand...

Thanks, Arty! Wouldn't it be great fun in a weird kind of way? I wonder how many CS members are playing with our soon-to-be machine overlords?
Last edited: Aug 1, 2022

Something I found in a newsfeed, you may find interesting:

Bloomberg - Are you a robot?

ZenDruid said:
Something I found in a newsfeed...
Click to expand...

Wow, that's very timely in light of recent discussion
The thing that sticks with me from all this is that these AI image generators are very much still in their infancy. Their output may be a little goofy now, but signs of growing sophistication are also in the mix. Very interesting stuff. Thanks for passing the article along, Zen.

ZenDruid said:
Something I found in a newsfeed, you may find interesting:

I remain unconcerned. The only reason I haven't taken the material I've generated and run with it is that I've had other obligations keeping me super busy lately. DALL-E is a magnificent idea generator.

I still don't know what to think about it!

So I just tried this Craiyon one just to see what it would do. 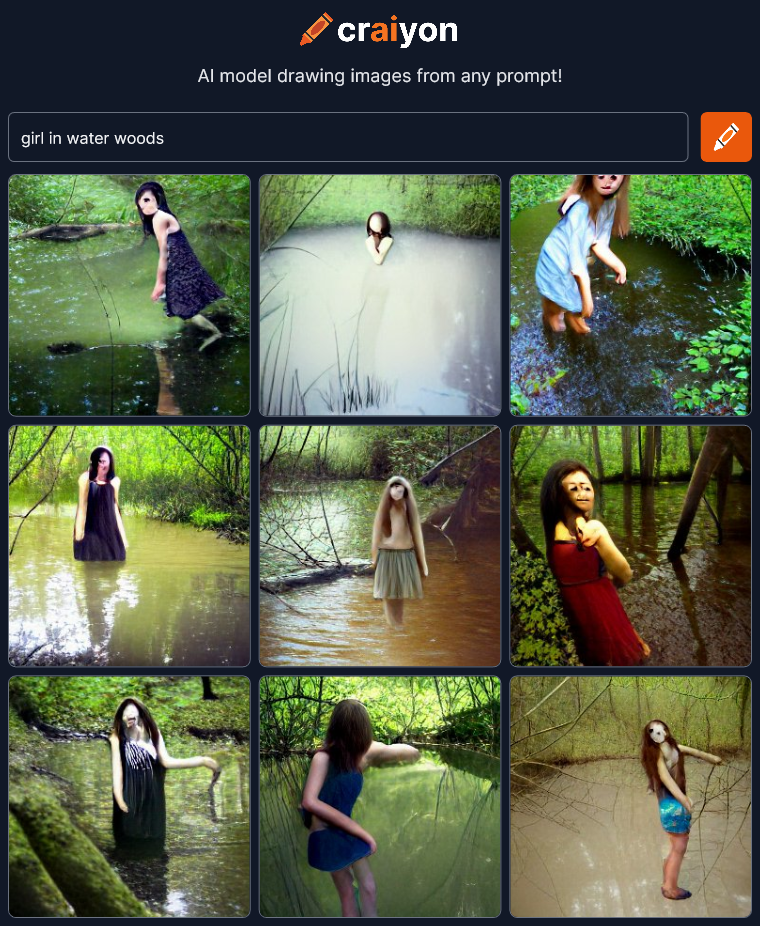 Maybe it's something in the water?
I've played some more with another generator and learned a couple of ways to influence it to a degree, with uploading something of my own being the main means. And it will take more or less of its cue from either the text prompt, or from other input (imagery you make on-site or supply from an upload) with the adjustment of a slider button.

And I keep playing with it. Can't stop