This painting is one of which I documented the most completely from start to finish. I began with the idea of two figures standing back to back... opposites... but without any clear theme at first. I began drawing directly on the working surface. 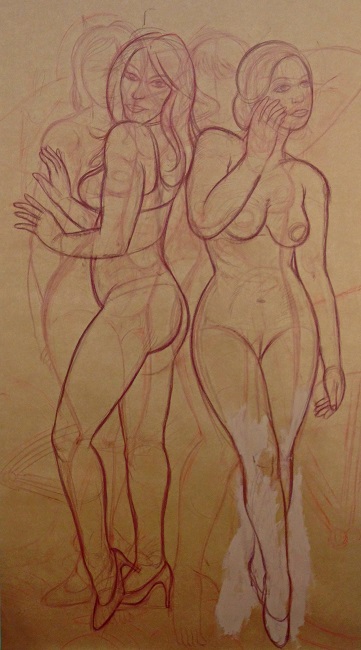 I have had several others suggest... and I quite agree... that there is something to these early stages with the underdrawings showing through. I have thought of stopping some works at this stage... thinking of Jenny Saville's big gestural drawings: 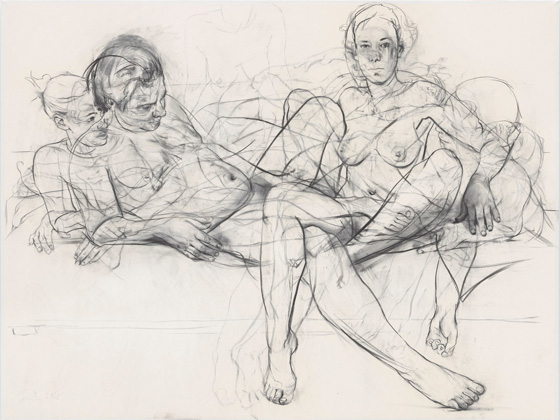 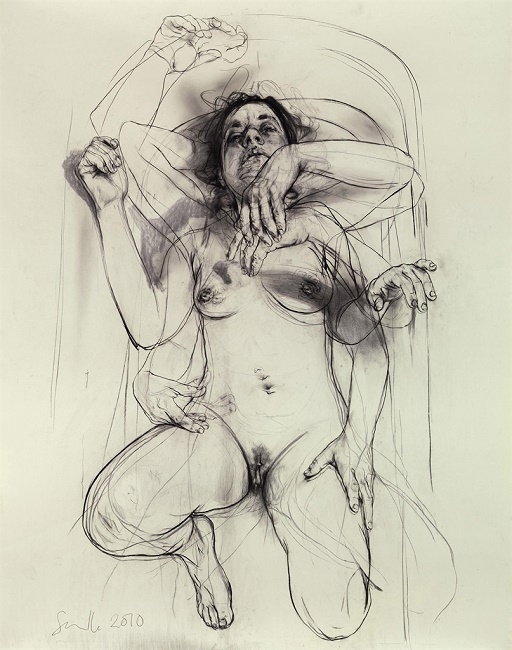 Once the figures were largely locked in I began working on the bigger shapes in the surrounding space and began priming the background with the usual reddish-brown/Burnt Sienna/Tuscan Red: 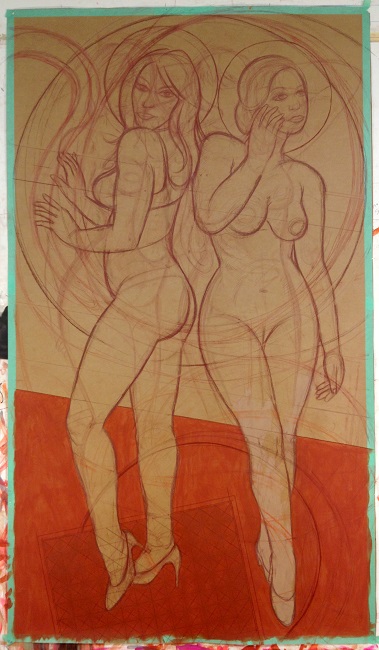 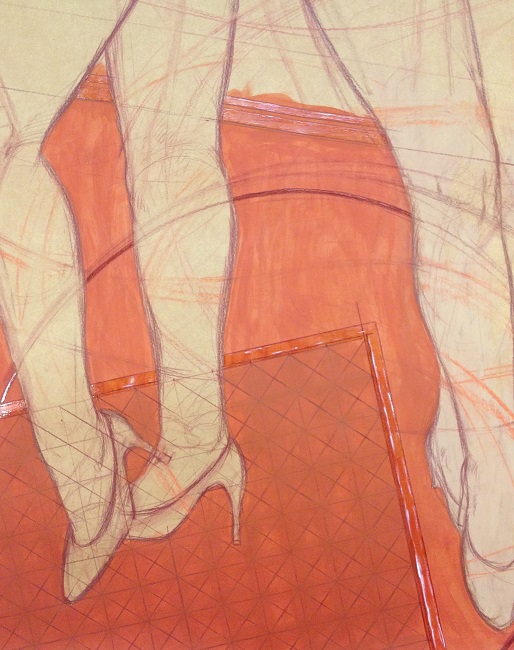 As I began adding color I initially thought of continuing to work with those extreme neon/florescent colors similar to the last painting... but this time in Lime Green: 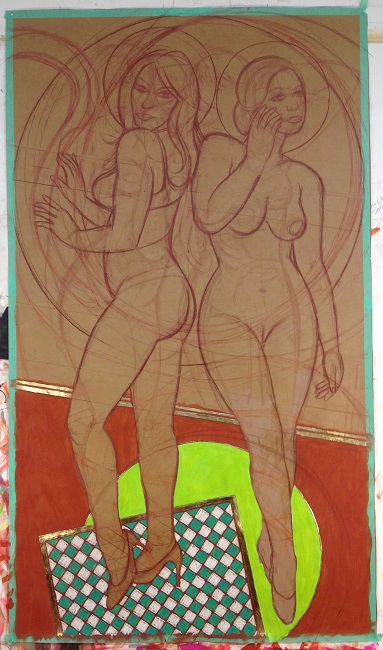 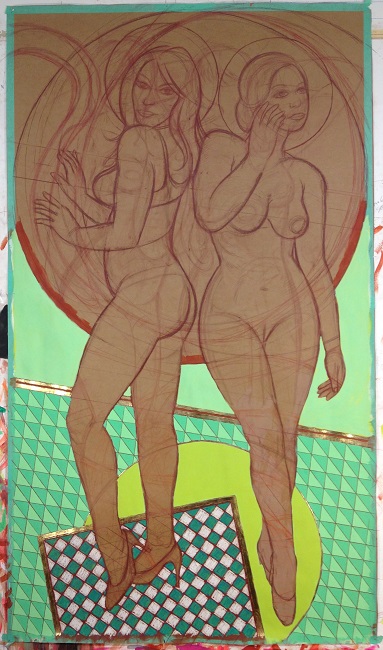 Green has never been a color that I have used as the dominant color in my paintings... thus I saw this as a challenge. 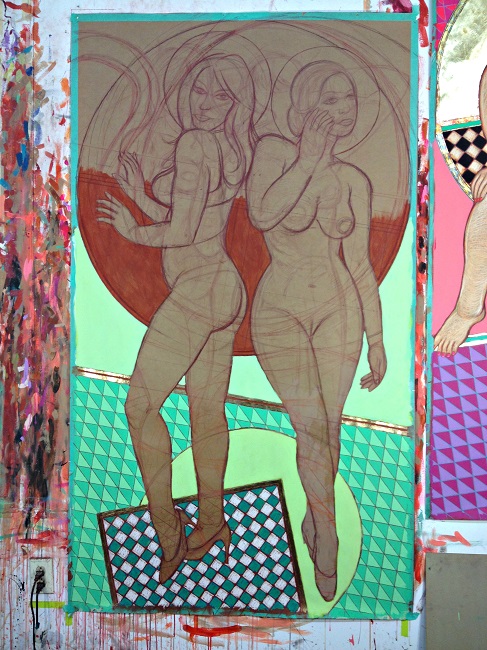 Again, you can see how the guidelines for the patterns go through the contours of the figures. You can also see how I am using the red variegated gold leaf... red contrasting the green: 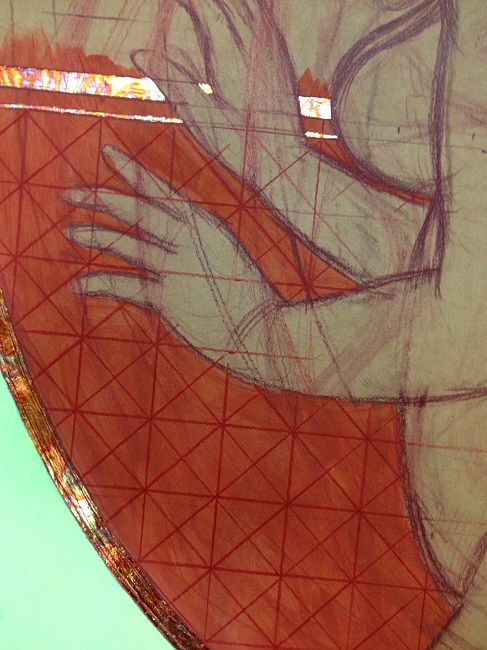 I chose to match the dark-green and white checkerboard above with that below... as a visual rhyme.

Here is a studio view of the work in progress flanked by the previous two paintings: 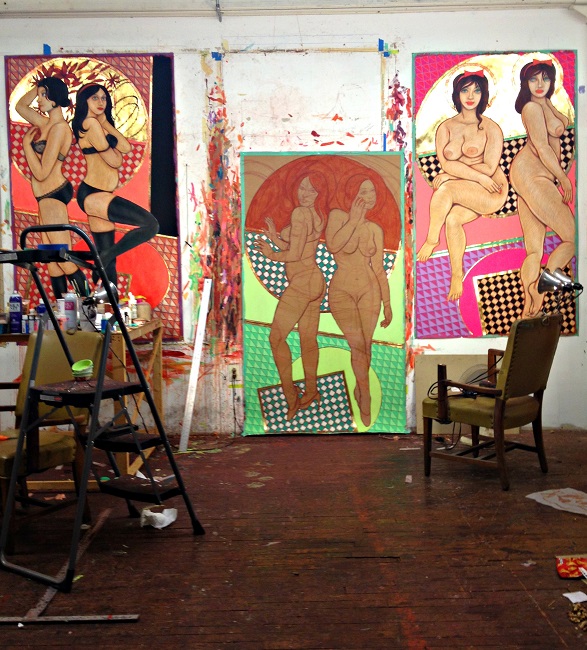 By now I thought of the Flora theme again... after all... there's all that green! I added flowers into the halo of the girl on the left.

And now begins the gold in the halos: 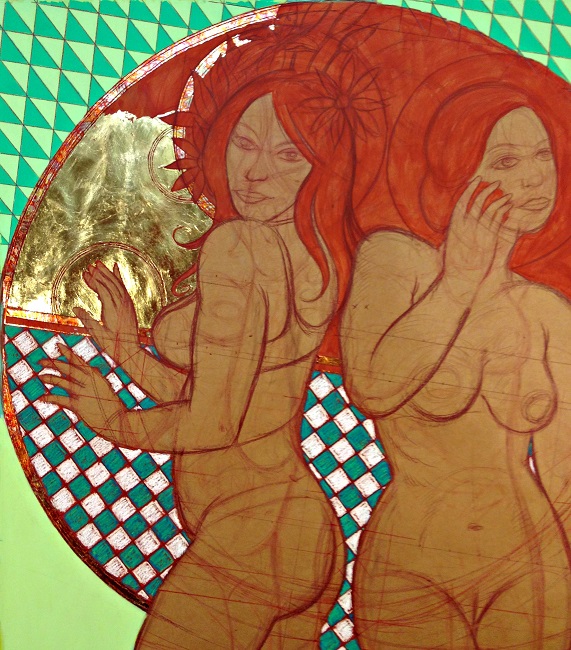 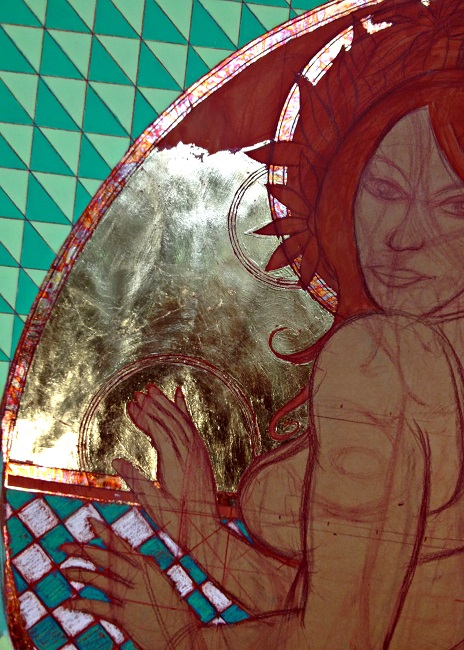 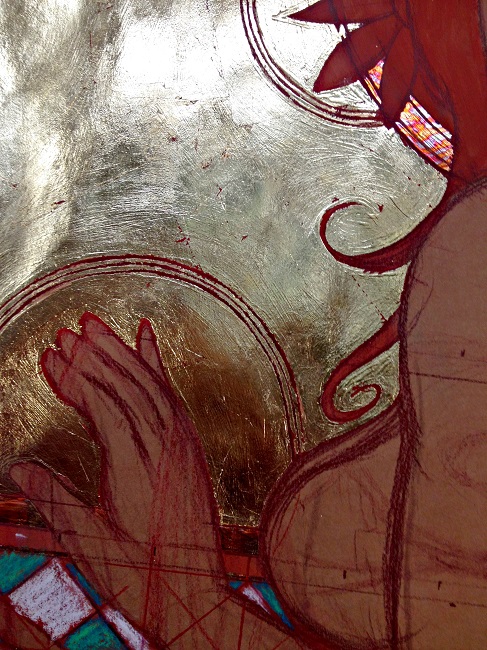 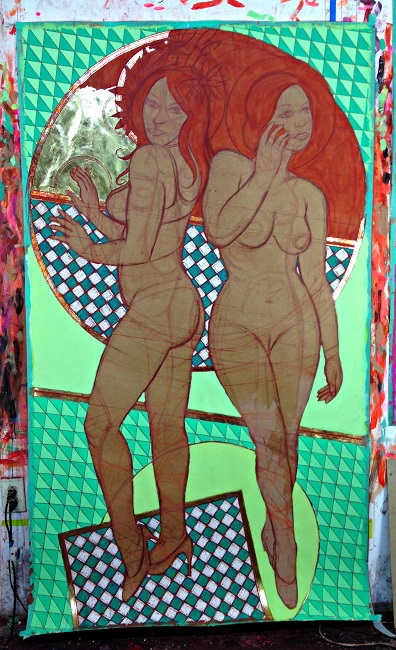 I usually block the hair in with black or a near-black at this time so that I can clearly see the shape of the hair against the reddish primer. 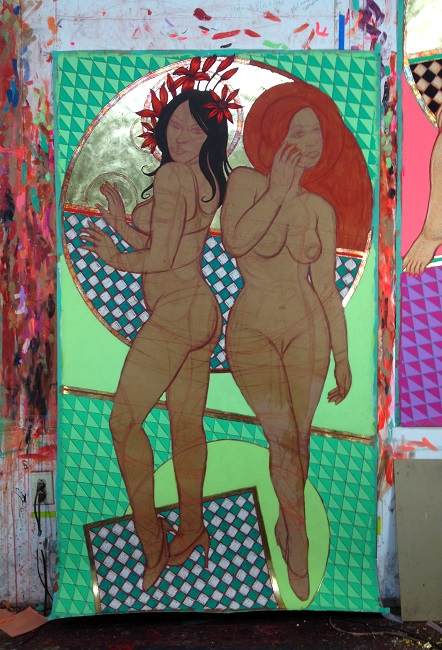 And then suddenly... I temporarily lost my mind. I thought let's make the top red and the bottom green... and then I even started adding red below... 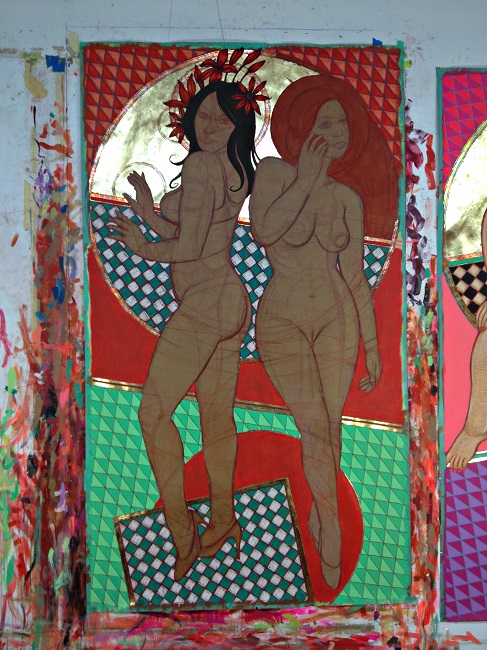 Soon it was red everywhere... except for the checkerboards... and it looked like crap... that ugly stage every painting goes through...

I spent the next weekend returning the painting to the initial green... or rather a less brilliant green harmony... 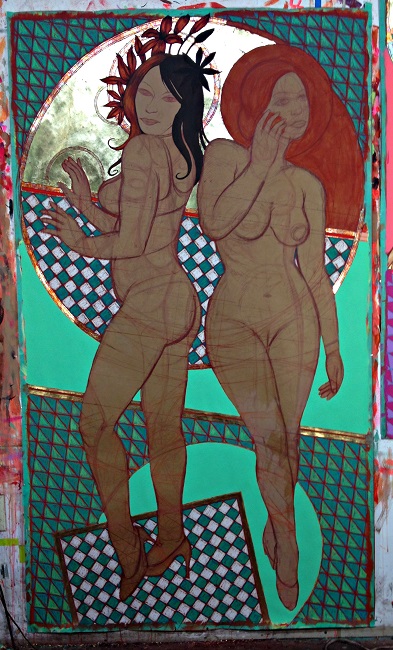 I actually quite liked the look of the brilliant red paint showing through the various green pastels layered on top: 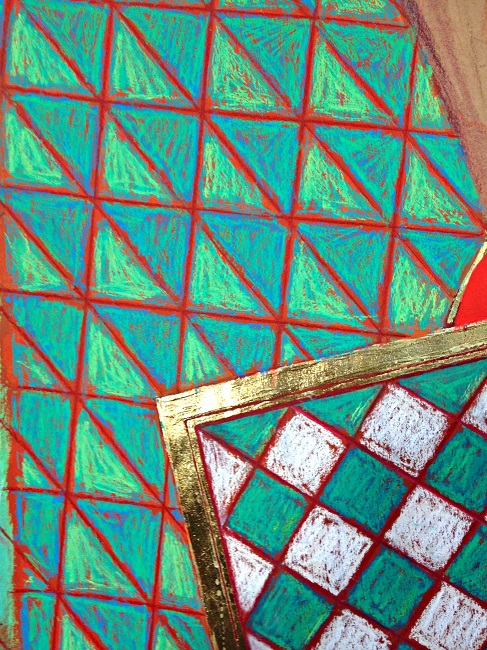 At this point I began working on the figures. I notice that there is an unfinished section of gold leaf still. I suspect this was one of the instances in which my art supply store had run out of gold leaf. 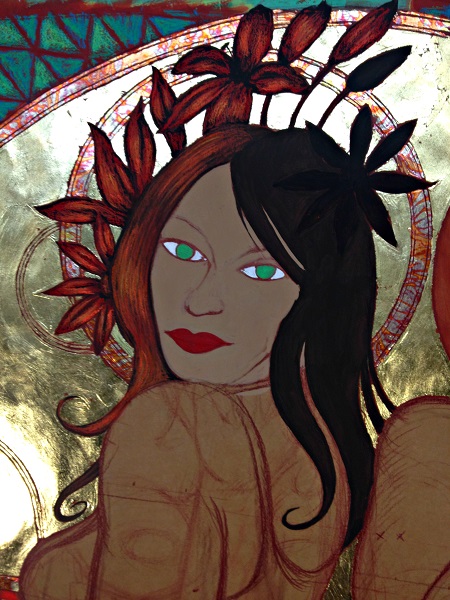 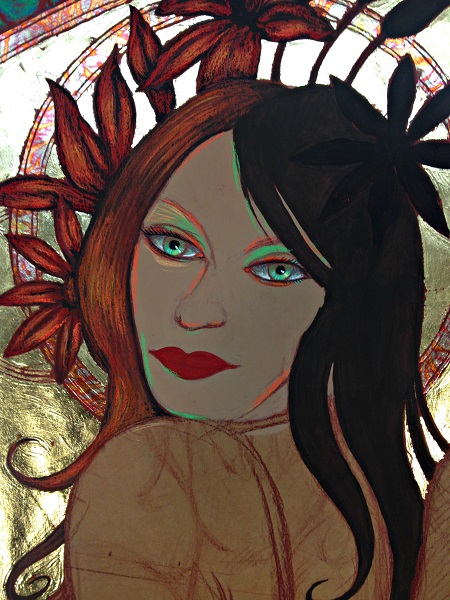 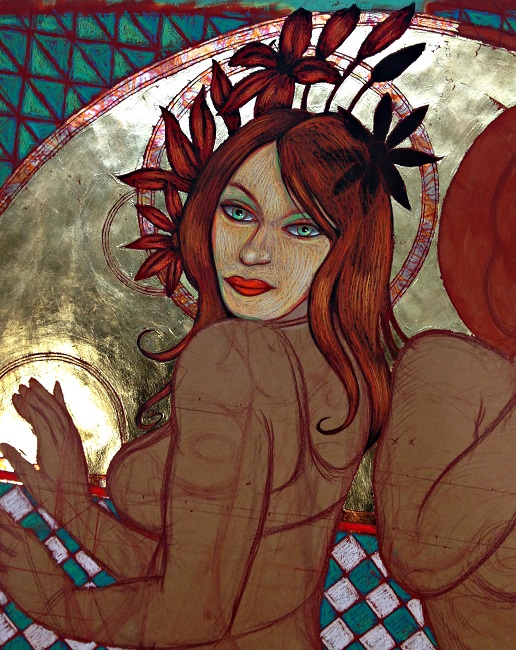 I selected green for the eyes and eye-shadow to pick up the green of the painting as a whole... along with the flashes of red. 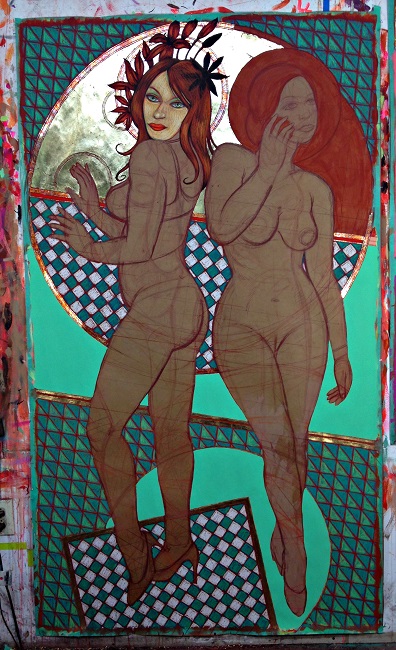 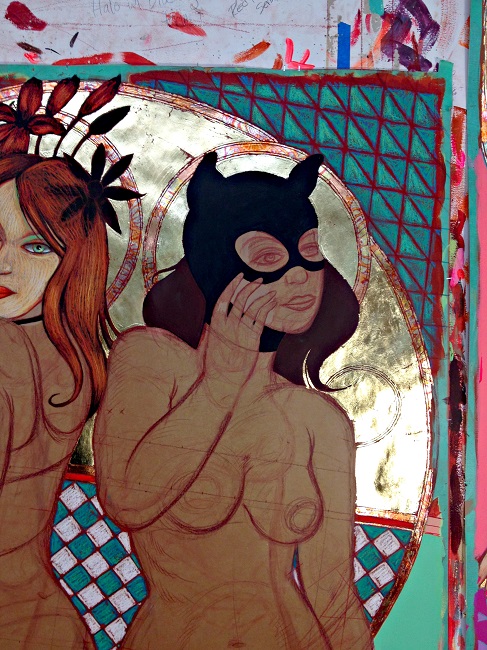 I gave her green eyes (cat eyes?) as well... with a good amount of red bounced into her hair. 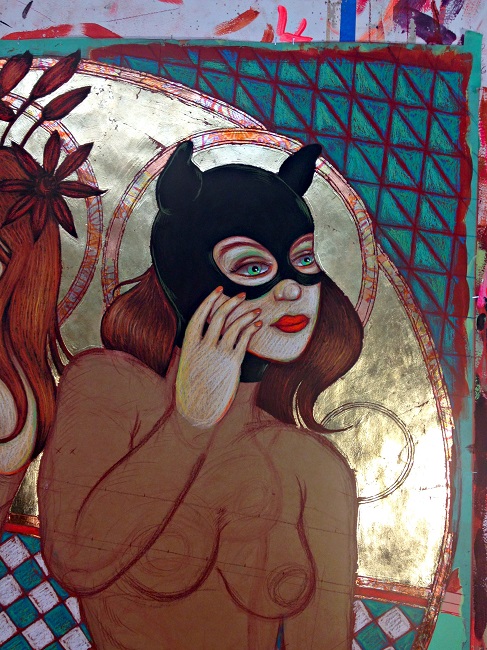 I often don't know how or if I am going to clothe the figures until I get to that stage in the painting. At this point I elected a black bikini for Cat/Bat Woman... or Fauna to contrast the reds of Flora. 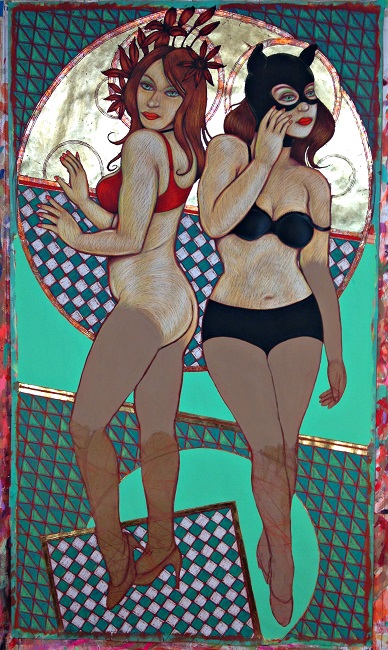 I finished with red stockings to balance the black on the right and to help avoid the eye staying only at the top of the painting. 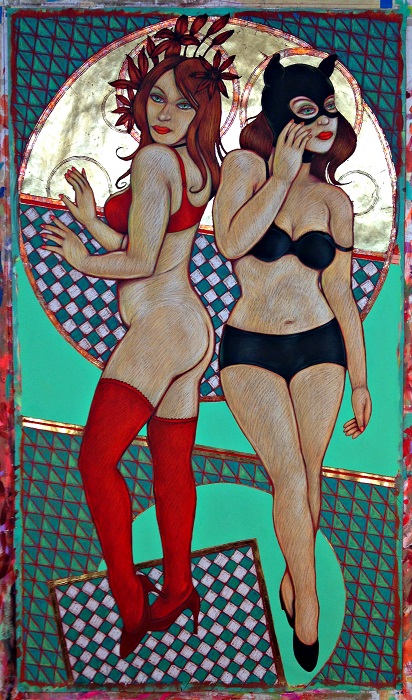 Exciting progress all the way to the nice finish. Thank you!