Acrylic on paper, 11 x 14", 1997. This was my second attempt at a color 2D portrait of a raptor. It could have been better in places, but was still good enough to published by request of Daryl Perkins, editor of Talon Tales, the magazine of the Massachusetts Falconry and Hawk Trust, for the cover of their Spring 2000 issue. It's a falconry bird, hence the reflection of the hawk house window in the eye. Daryl is a rarity in the falconry world--he's black. One of the world's leading experts on the training of goshawks, he is now President of the North American Falconers' Association. The chop seal was acquired by my parents on a trip to mainland China and supposedly is a rendition of my family name. The JPEG has been opened many times and hence is a bit degraded; details like the rictal bristles and window reflection are not as sharply defined as they are in the actual piece, which was sold at the 1998 New England Wildfowl Carving Championship. 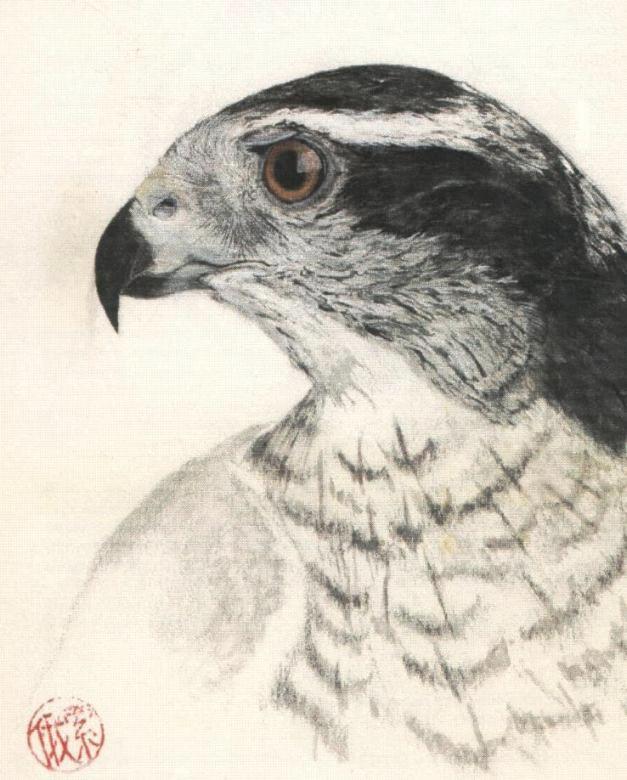 Musket, this is exquisite! You never cease to amaze me with your skill (and knowledge). Just beautiful, really.

I wish you were able to still do this.

Thanks, Arty. Me too.

Beautiful! I love the detail around the eye and bill.

Thanks. I was very happy with the work on the beak and eye. The rictal bristles are very sharply defined in the original.

Finns are big and aggressive, with very stout legs and toes, and are favored by many falconers.

I was just wondering after googling the name, why is this hawk called Finnish Goshawk. Google didn't give me an answer. Just for curiosity.

I was just wondering after googling the name, why is this hawk called Finnish Goshawk. Google didn't give me an answer. Just for curiosity.
Click to expand...

Just because that's where they're from--taxonomy has them as Accipiter gentilis gentilus, the nominate species of the northern goshawk. They have a big reputation with falconers, even in North America. Our native subspecies, A. gentilis atricapillus, tend be a little smaller than any of the Eurasian gosses.
Last edited: Oct 10, 2021
You must log in or register to reply here.
Share:
Facebook Twitter Reddit Pinterest Tumblr WhatsApp Email Share Link
Top