This painting was originally painted in Italy

I've now been fixing it in studio. What I still see odd in this one is that maybe I should fix the straight lines of the buildings and the chimney. I think the walls are not going straight enough to the ground. The roofs tend to be strange in Italy but at least in Burano the walls were straight lines. Now that I'm looking at it again, maybe the roofs need more work too. Also I try to do something more to the sky. Give it some more air. I don't know when to stop fixing this painting. What do you see the most strange in this painting? C & C most welcome.
After the picture there's a story what happened in the painting place. 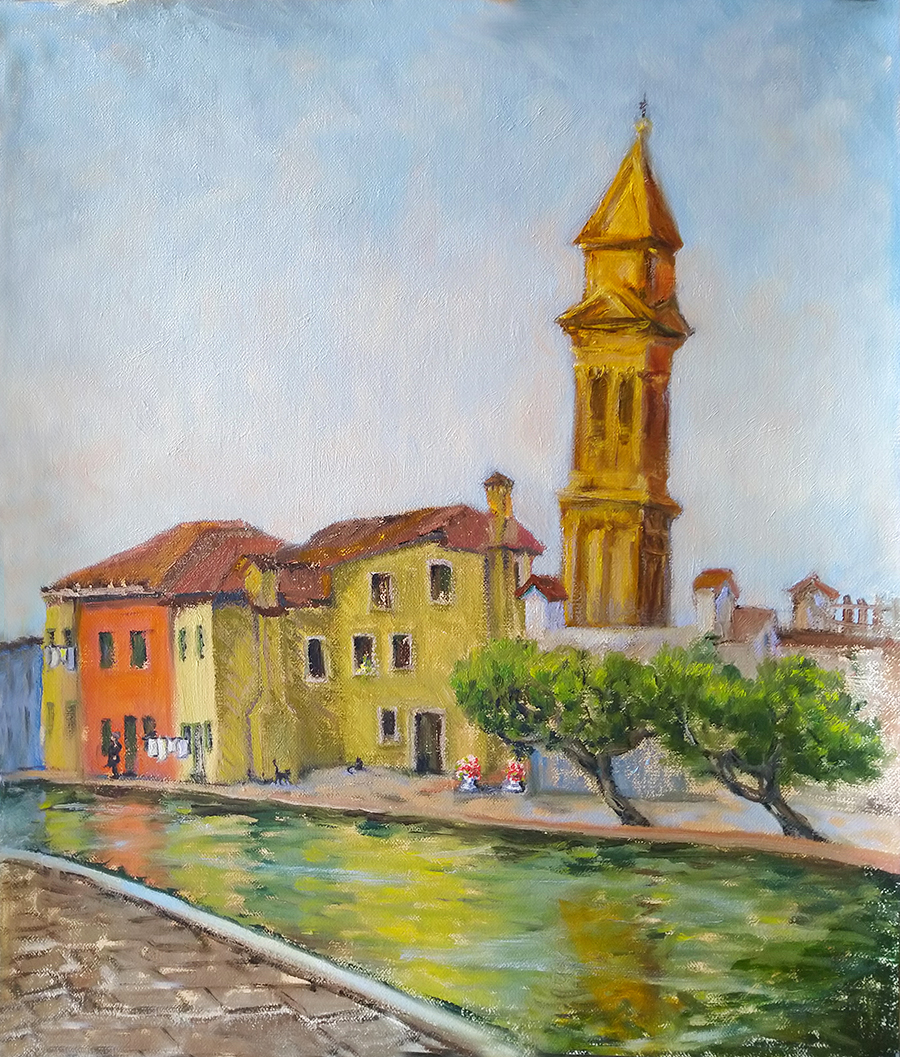 I wrote to fb this story and it explains the leaning tower (if your wondering why I painted it in angle)
"An elderly Italian grandmother came from her home down to the street to check me painting. She said something to me in Italian which I couldn't understand. She didn't go away and didn't give up: she repeated several times 'storta' .. I could only shake my head, I didn't know why was she repeating that. Then there appeared a 15-yr-old grandchild and he spoke Spanish to me and explained that the grandmother is saying I'm painting the tower straight but it should be tilted to the right. Although the young boy thought it doesn't matter if it's straight or has angle in the painting.
I'm glad the grandmother and her young interpreter came out to the street and I got the tower correct. 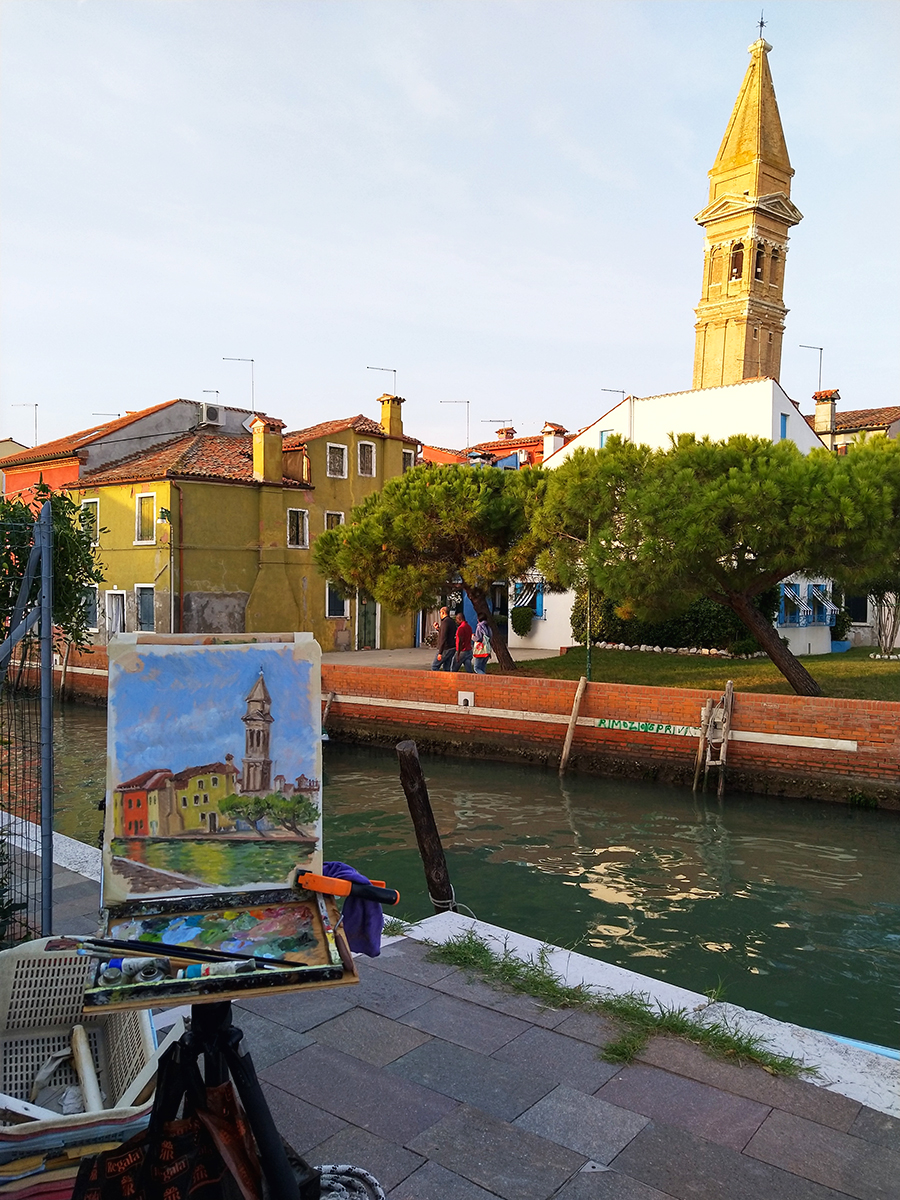 I forgot to mention that I don't have focus anywhere atm, should the focal point be trees?

The tilted tower looks strange until you see the photo and the roofs are hard to translate, even with the photo but locals would see the corrections if you changed them. They recognize how they are supposed to look. I think the focal point has to be the tower, no getting around that. Well painted.
N

I agree with sno because even the photo looks odd, but the locals would know that this tower was architected at an angle a bit like Pisa? I imagine "storta" means that you needed to paint it angled--"distorted," if you will, because that is how the locals see the tower. Maybe it's not actually angled, but it appears to be in contrast with the other buildings, especially from that main waterfront view outside the other canals. Is that the tower in St. Marks? If so, it's not built at an angle and must only appear that way from that perspective.

I think it's still a very beautiful painting. Maybe you can straighten out the other buildings to the left, but leave the rest alone? Just a thought.

Thank you so much Sno, ntl and Arty. If you all think the tower should be in focus, then I try to make that focal point. (If I figure out how

to do that. )
Arty, I never heard that the Pisa tower was built to an angle but I have heard that the ground underneath is giving up and that's why the towers are tilted but I could be wrong too, I don't know that much of the history of these tilted towers. I also heard, they are trying to put the Pisa tower straight all the time but it still keeps on falling. Same happens to many towers in the islands of Venice, like the one in my painting. The city of Venice is built on a swamp land and now water is taking over and making land material even softer. No, this tower is not St.Marks which is in the city center of Venice main island. I think St.Marks is quie straight, isn't it? The tilted tower in my painting is in another island called Burano. I took a vaporetto from the main island and spent one day painting there. Yes, this tower is actually very much angled, it's not a perspective issue.

Artyczar said:
I think it's still a very beautiful painting. Maybe you can straighten out the other buildings to the left, but leave the rest alone? Just a thought.
Click to expand...

I did just that last nite and it already improved the painting a little more. Thank you for your advise. Also gave the sky little ultramarine blue. Still working on other areas of the painting .. like the tower . I think it still look quite strange. I should have listened the young boy and leave it straight. But in that case the granny wouldn't have left me alone ever.

Sometime those Italian grannies need to leave us alone!

I am mistaken about Pisa. I always thought it was architected that way. But you are right! I just read about it. I never realized it was on unstable ground from the get-go.
T

I like the tilt on the elements , tower, trees, buildings and think they complement each other very much.
It looks like you had clouds at one point, and I would really mess with that clear blue sky and ruin it for most people.
I love the ambiance you have captured.
P

I really like it just like it is and I love the story that goes with it.

Trier, thank you! Your right, there were faint clouds at one point. Venetian sky changes constantly. Makes plein air there very tricky.
PSA, thank you for commenting!

You’ve done a pretty fine job with this complex plein air. Very ambitious! Since you’re making changes, instead of verbal, I’m sending you a crude digital version I worked up showing some value /chroma changes.

Dave, thanks, glad you like it.
P.Barrie, thank you so much for the digital version.

It opened my eyes to the value problems I have with this painting. I just didn't see them when I was trying to fix this painting. I'm learning huge amount of cityscapes and values in general with your digital version. Will continue working more on this painting by paying attention to the values as you indicated. I think they could be the solution so that the painting starts to read. Working on the digital version has been a lot of work for you and I appreciate all the work you've done! Thank you!
M

Looks very good moscatel, they are having trouble with the leaning tower of Pisa. The powers that be have poured tons of concrete into the foundations.
By the way, if you would like to paint a tower from a photo, I have a few I took of Pisa. 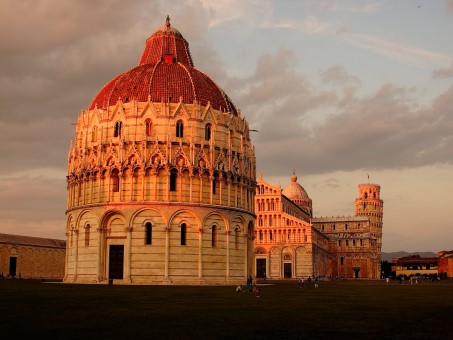 Here is my Pisa. Ha.

Arty, hope you didn't do that from a photo. The lean is slightly off. I shouldn't nitpick though.