I think this is the third time I have painted on this canvas which I had previously textured with tissue paper and molding paste. I just keep covering the old paintings with gesso and trying again. The texture looks very strong up close but it hardly shows from across the room. I like that it's kind of an abstract image. The knife kept me from even thinking about adding details, which is a good thing for me. Acrylic 8x10 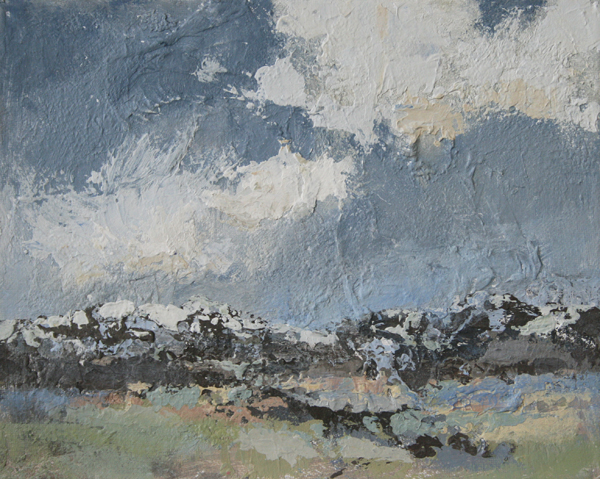 Donna T said:
I think this is the third time I have painted on this canvas which I had previously textured with tissue paper and molding paste. I just keep covering the old paintings with gesso and trying again.
Click to expand...

Well Donna: that's how we learn .. I like the subdued color scheme. I think it would look special in a old barn wood frame.

I love it, Donna! This is beautiful, and I love the texture you've built up here. It's definitely a beautiful landscape, abstract but still definable. Great work!

I love it. Beautiful textures and I just love those colours.

Triduana said:
I love it. Beautiful textures and I just love those colours.
Click to expand...

Very nice! I love the clouds!

Love the muted colors and the texture just gives it a professional look. Very well done.

Excellent and fun. Colors and texture right on.

Wayne, I was thinking of an elaborately gilded rococo-style frame for this one ...

Thanks and I hope I'm learning something.

Terri, Kay, Hermes, ntl, sno and Jo - many thanks for your thoughts! I'm glad you think the colors work and that the texture isn't too distracting. I just have to remind myself that we usually don't view artwork quite this close-up.

Thanks to all who looked and "liked" too!

You are doing fine. You keep painting and that is key.

A man approached another and remarked how smart he was. Do you have a secret he asked. Yes, said the man. My grandfather gave me a bottle of get smart pills and after a few I got smart. I'll buy some from you said the other. A few days later the other approached the same man and accused him of being a fraud and a liar. He said the pills were nothing but rabbit poop. Well, said the man, you can't deny you are smarter already.

Thanks Wayne - I needed that!

Love the texture in this, and it's got a great abstract vibe. It's really neat. I love it.