As I mentioned on another thread, Albrecht Dürer is definitely an artist worth exploring in some detail. Dürer was born and raised in Nuremberg, Germany. He was the son of Albrecht Dürer the Elder who had moved from Hungary to Nuremburg a talented goldsmith who married his master's daughter and eventually took over his father-in-law's business. Dürer's godfather Anton Koberger left goldsmithing to become a printer and publisher in the year of Dürer's birth. He became the most successful publisher in Germany, eventually owning twenty-four printing press workshops. Albrecht was likely introduced by Koberger to Michael Wolgemut, the leading artist in Nuremberg at the time and a master printmaker. Dürer's father wanted him to continue his training as a goldsmith, he showed such a precocious talent in drawing that he started as an apprentice to Wolgemut at age 15. Dürer was one of the few true child prodigies in Art who went on to become a major figure. A drawing in the difficult medium of silverpoint made at age 13 is one of the first known self-portraits in Renaissance art: 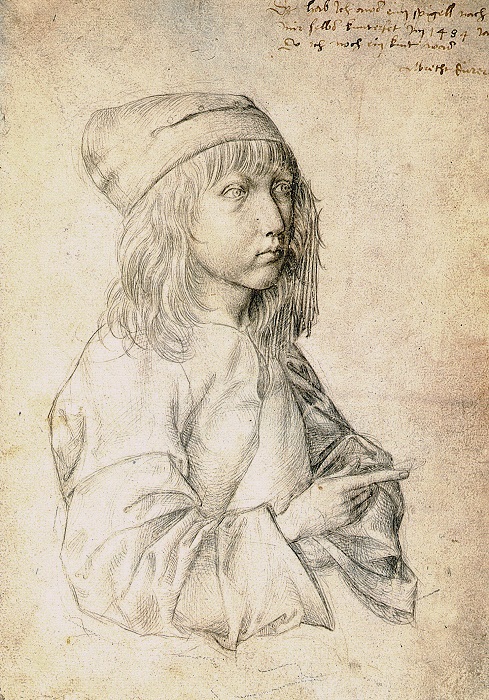 In 1490, Dürer left home for 4 years traveling about Northern Europe as Journeyman. He stayed in Strasbourg and Colmar and likely worked with Martin Schongauer, the greatest printmaker in Northern Europe. It may have been possible that he also met Matthias Grünewald at this time. Some time later, around 1505, Grünwald would work on the exterior decoration of an altarpiece by Dürer. In 1493, during his travels in Northern Europe, Dürer made his first painted self-portrait: 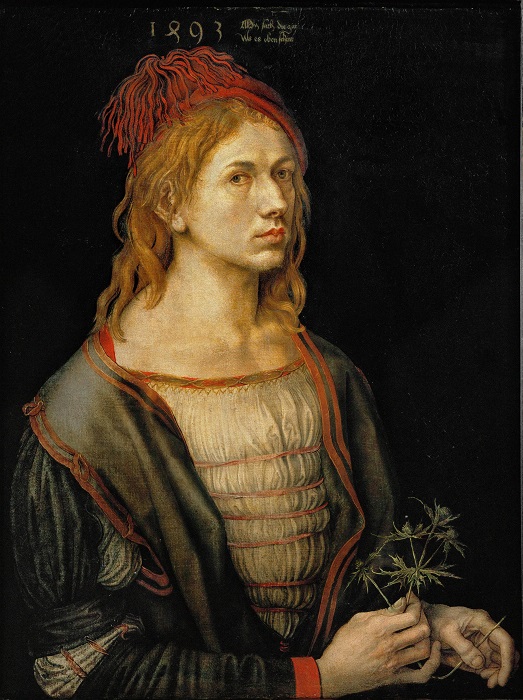 In 1494, Dürer married Agnes Frey, following an arrangement made during his absence. Agnes was the daughter of a prominent and wealthy brass worker. The marriage between Agnes and Albrecht is thought to not have been a happy one, as indicated by the letters of Dürer in which he called her an "old crow" and made other vulgar remarks. Dürer's close friend, the lawyer, politician, and Humanist philosopher, Willibald Pirckheimer also made no secret of his antipathy towards Agnes, describing her as a miserly shrew with a bitter tongue, who helped cause Dürer's death at a young age. A number of historians speculate that Albrecht was bisexual, if not homosexual, due to several of his works containing themes of homosexual desire, as well as the intimate nature of his correspondence with certain very close male friends.

Within 3 months of his wedding, Dürer left alone for Italy. He made a good number of watercolour sketches as he traveled over the Alps. 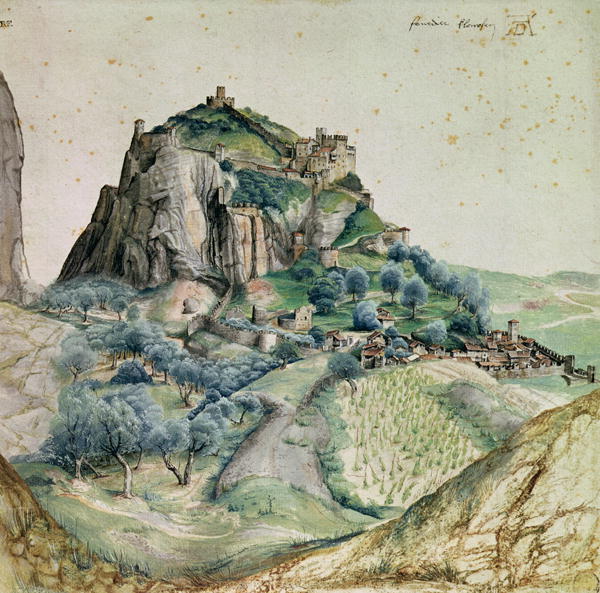 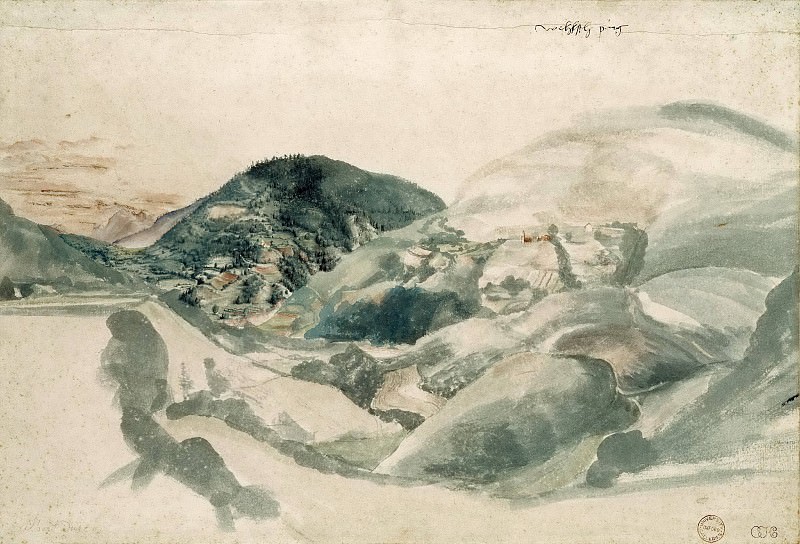 In Italy, Dürer would spend much of his time in Venice where he befriended the painter, Giovanni Bellini. He was also exposed to the works of the printmaker/painter Antonio Pollaiuolo as well as the artists Lorenzo di Credi and Andrea Mantegna. His Italian experience would have a huge impact on his later development... especially with regard to the use of linear perspective and human anatomy and proportion.

Upon returning home to Nuremberg in 1495, Dürer opened his own workshop working as a graphic artist making wood and copper-plate engravings as well as paintings. During this 10-year period in Nuremberg, some of his most important works include the wood engraving suite on the theme of the Apocalypse... a popular theme as the year 1500 approached and many feared the end of the world was near: 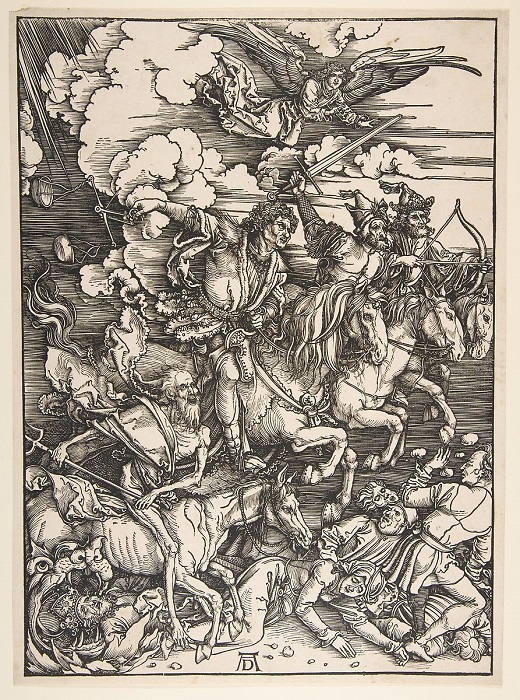 The most famous of this suite is the Four Horsemen of the Apocalypse... one of the best-known works of graphic art.

In 1498, the same year as the Apocalypse Suite, Dürer painted a second Self-Portrait... 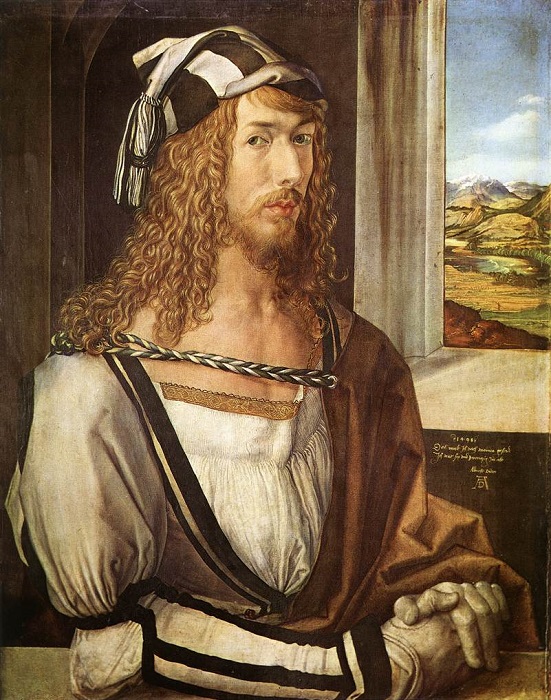 This painting was likely an advertisement for the artist kept on display in his studio. He portrays himself as an artist/aristocrat dressed in the latest fashions including lamb-skin gloves, his hair styled in perfect ringlets. He sits before a window where we see a landscape of the Italian Alps. He is not merely an aristocrat among artists, but a traveled man of the world. 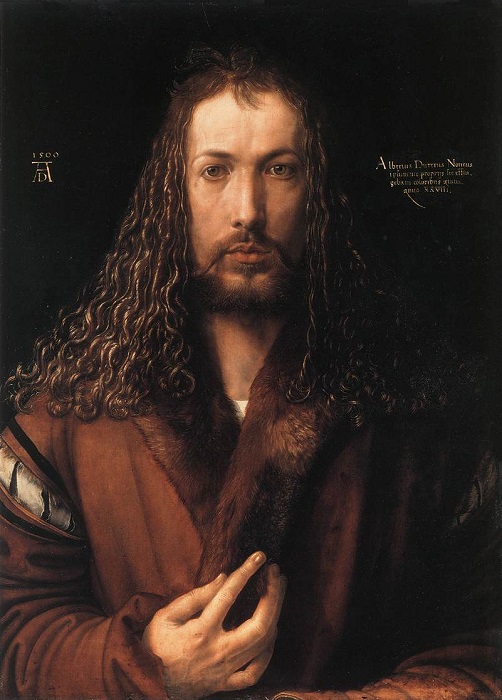 These two self-portraits clearly prove that Dürer was as much of a master of the art of painting as he was of the graphic arts. Even so, both of these paintings fall fully within the tradition of Northern European painting. The second painting especially reminds me of Van Eyck's God from the Ghent Altarpiece: 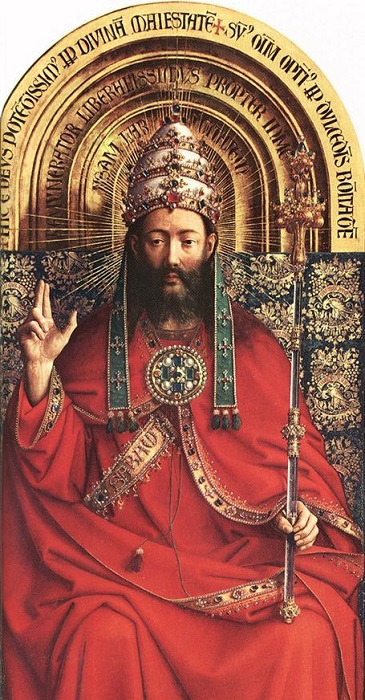 In 1504, Dürer completed one of his most brilliant engravings: Adam & Eve. This work shows how well he absorbed lessons on anatomy and proportion from the Italians. He was inspired to create a masterpiece of engraving by Antonio Pollaiuolo's Battle of the Naked Men. Adam was certainly indebted to the recently excavated Hellenistic Apollo Belvedere, while Eve surely owes to the Greco-Roman Aphrodite of Knidos and/or Aphrodite Pudica. 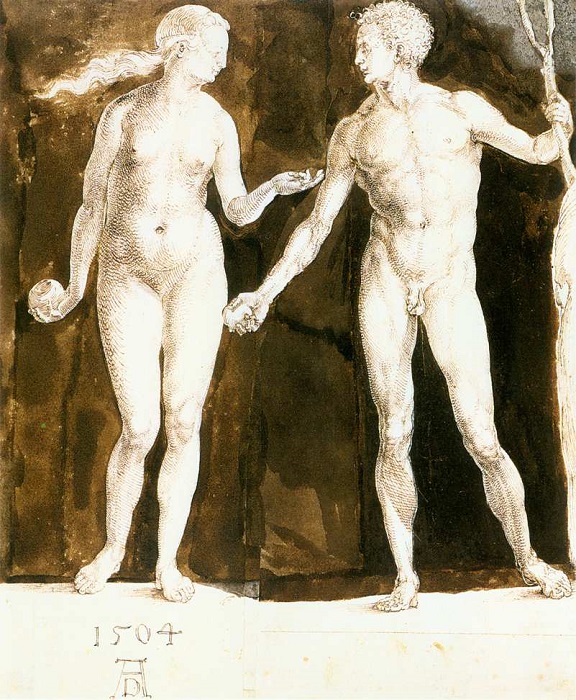 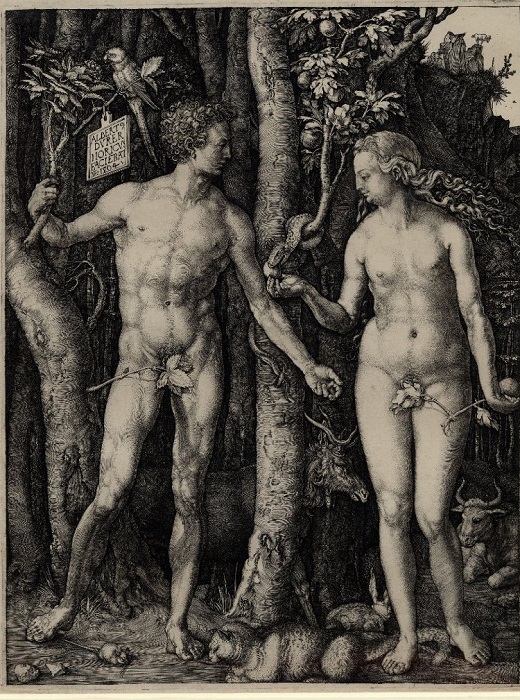 At the same time, the print is almost unrivaled in the artist's ability to suggest various textures through purely linear means.
Last edited: Jul 18, 2021 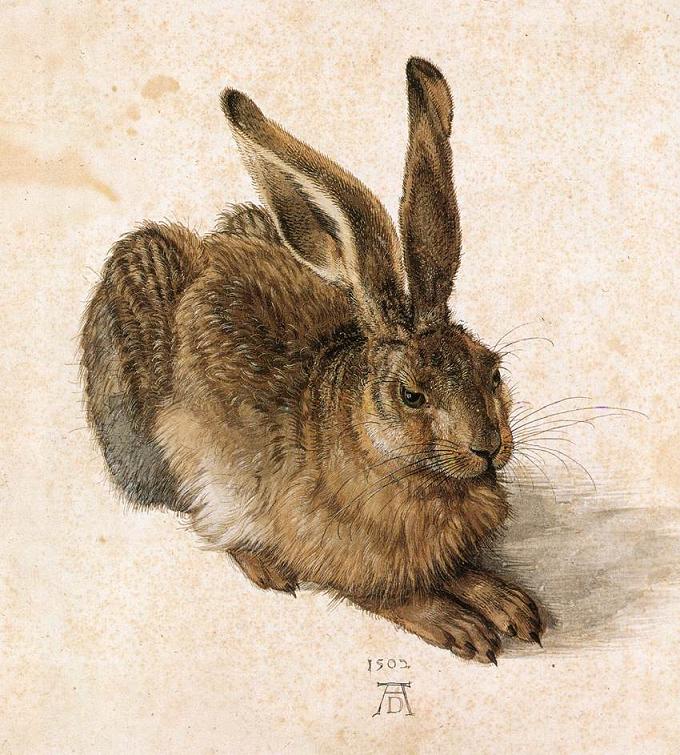 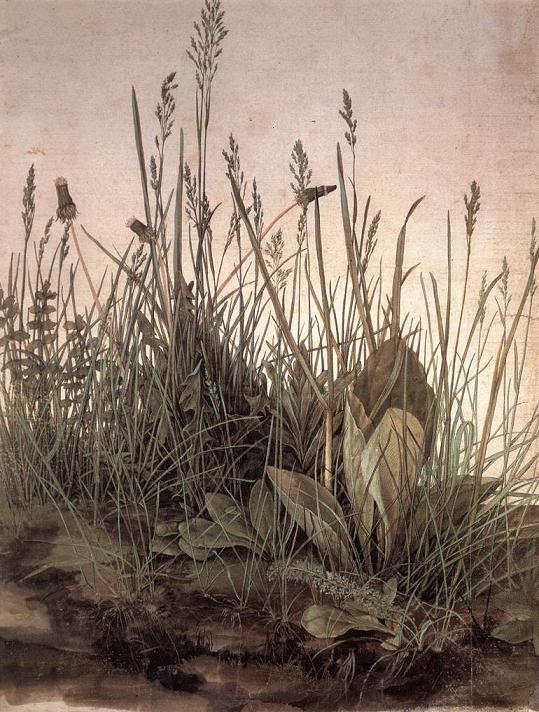 Paintings such as the Young Hare and the Great Piece of Turf are only rivaled by Leonardo in their careful observation of the elements of the natural world.

Dürer returned to Venice from 1505-1507 and spent most of his time there working as a painter. Among the paintings from this period are two lovely paintings of Venetian women. The first of these... which I personally prefer... is more linear and Germanic in style: 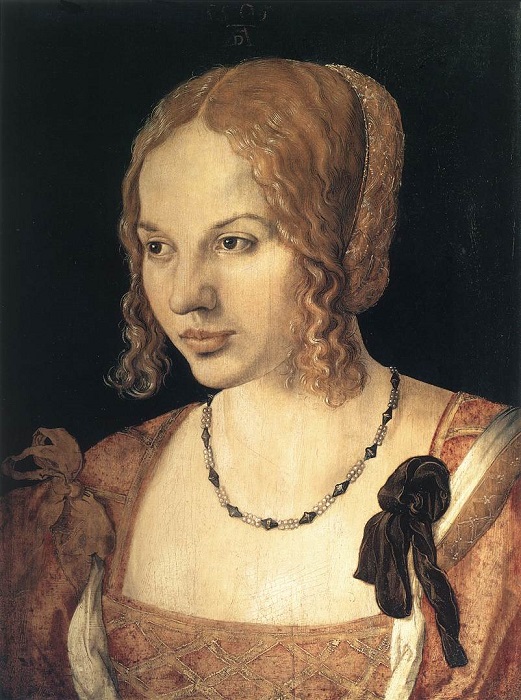 The second is clearly indebted to the Venetian painters including Bellini... but quite likely Giorgione and Titian as well. The painting is broader and emphasizes the big forms through the strong use of shadows. 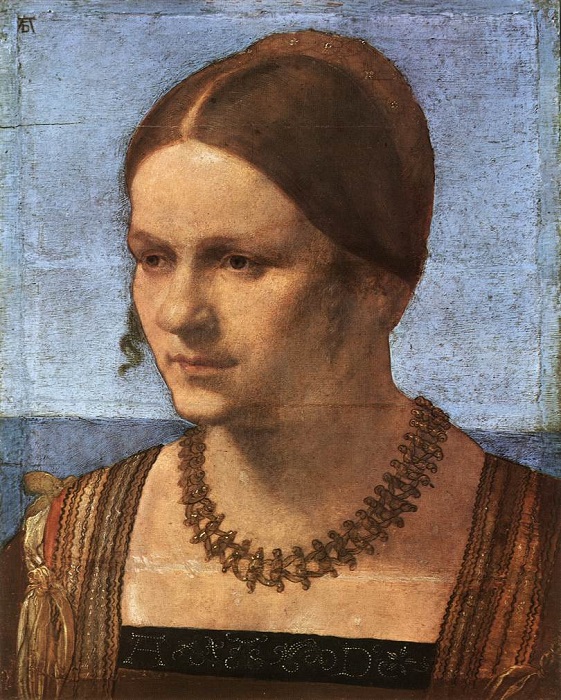 Dürer returned to Nuremberg by mid-1507, remaining in Germany until 1520. His reputation had spread throughout Europe and he was on friendly terms and in communication with most of the major artists including Raphael. During this period, the artist produced many of his finest and best-known works including: 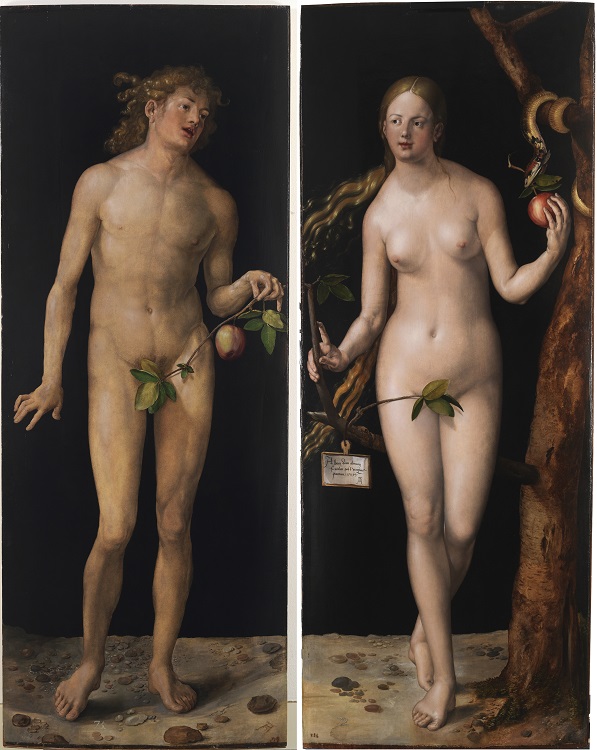 ... the incredibly detailed and textured engraving, Knight, Death, & the Devil... which just may be my favorite work by the artist... 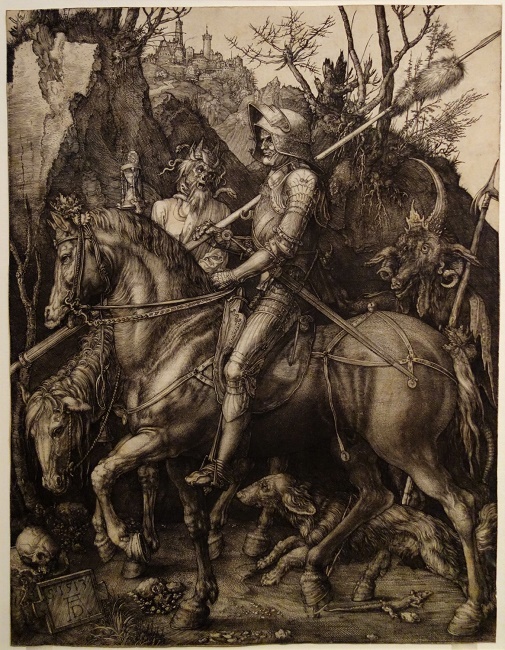 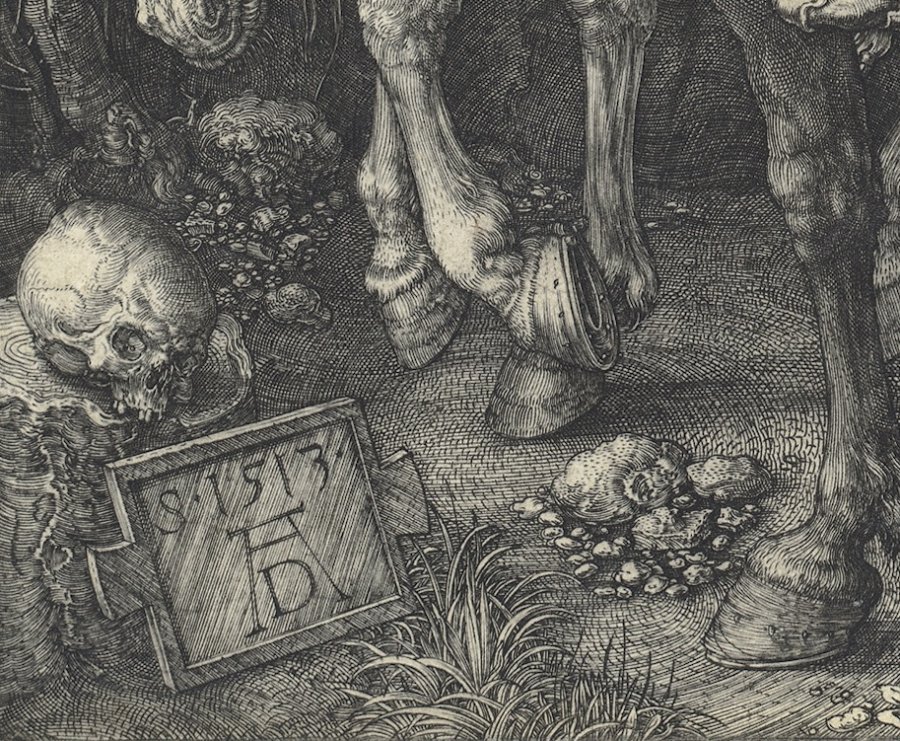 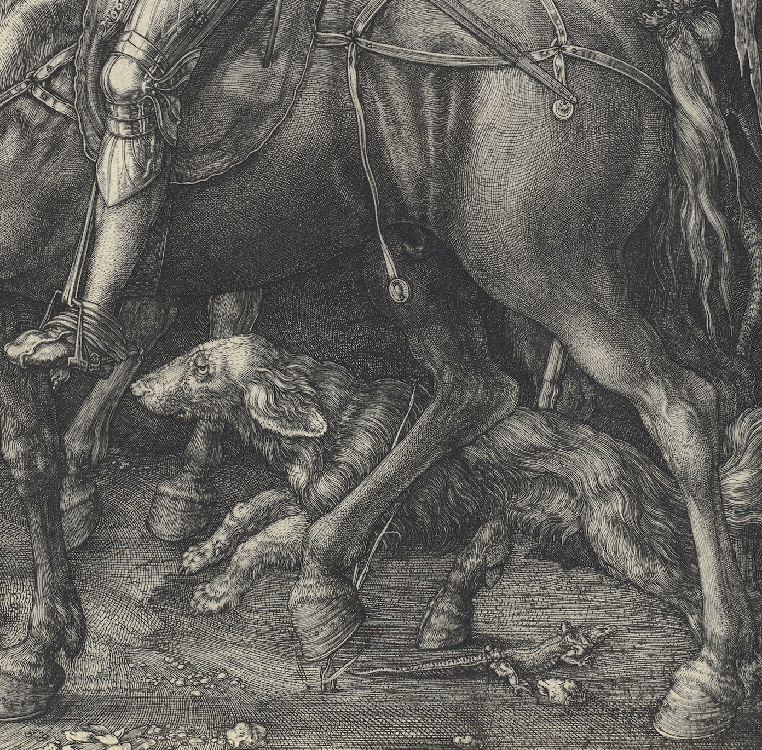 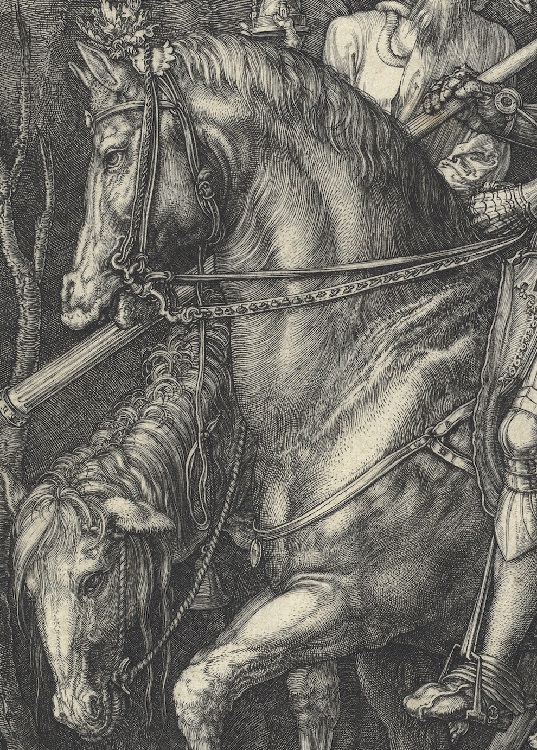 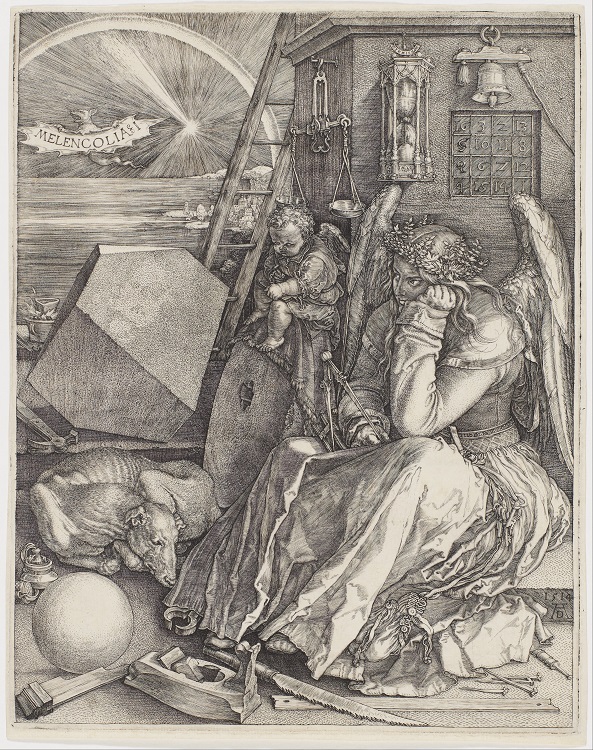 I'm not prone to overuse the word "awesome," but after all, this is Dürer.

And there were several suites... especially the so-called Large Passion and the Small Passion... which presented a series of images of the life and death of Christ:

Adoration of the Magi... 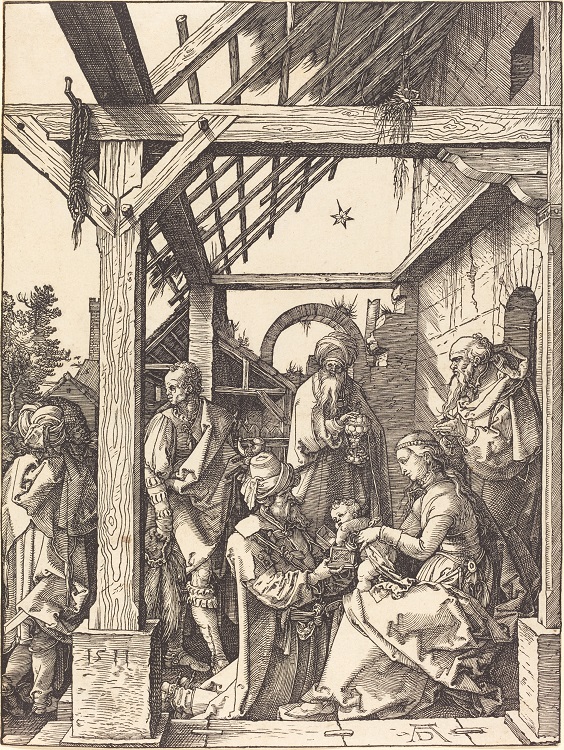 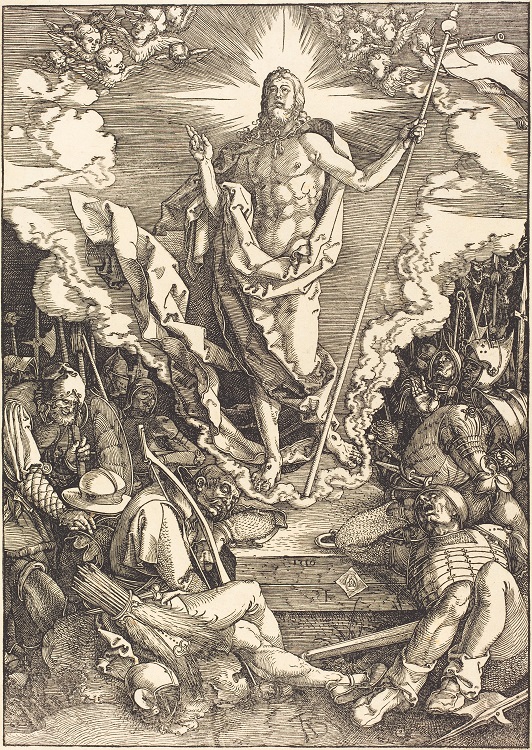 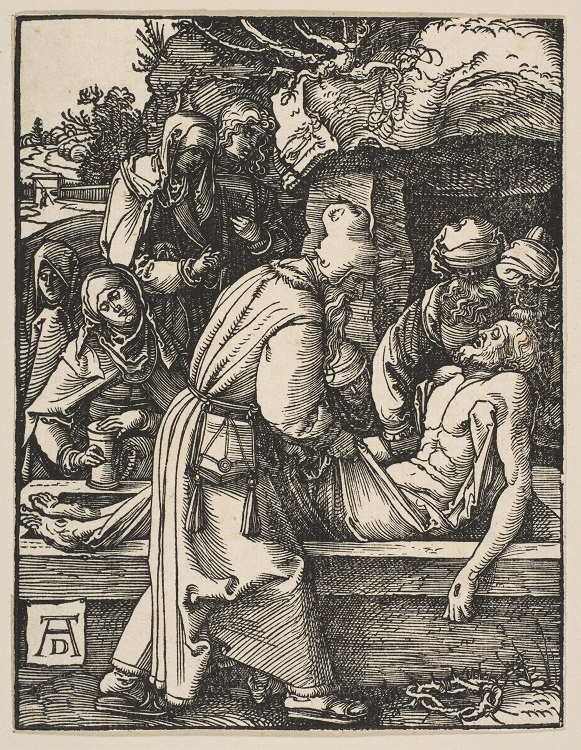 and The Harrowing of Hell/Christ in Limbo... 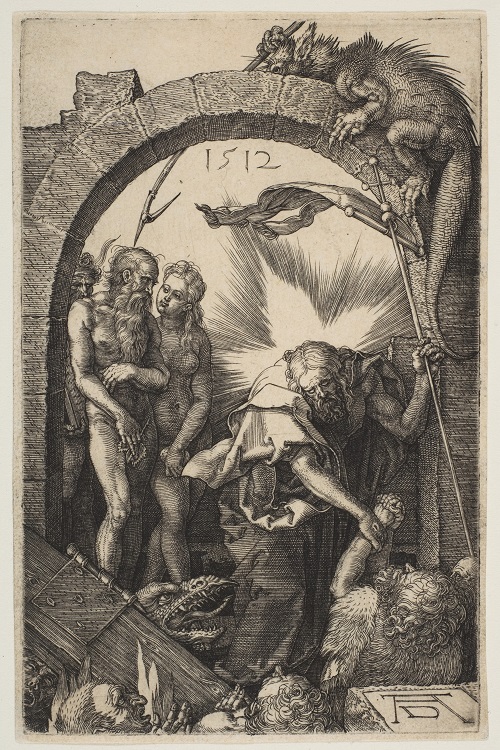 Dürer traveled throughout the Netherlands from 1520-21. Here he saw works by Michelangelo, Jan Van Eyck (the Ghent Altarpiece), Joachim Patinir, Quentin Matsys, and possibly Heironymous Bosch. He developed an illness before returning home which would plague him for the rest of his life until he died in 1528. Among the finest of his late works we should include his portrait of his friend, Willibald Pirkheimer: 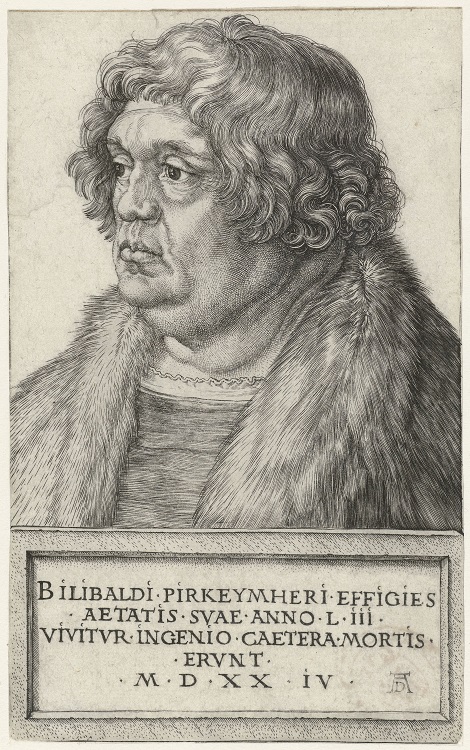 ... the Portrait of Hieronymus Holzschuher... 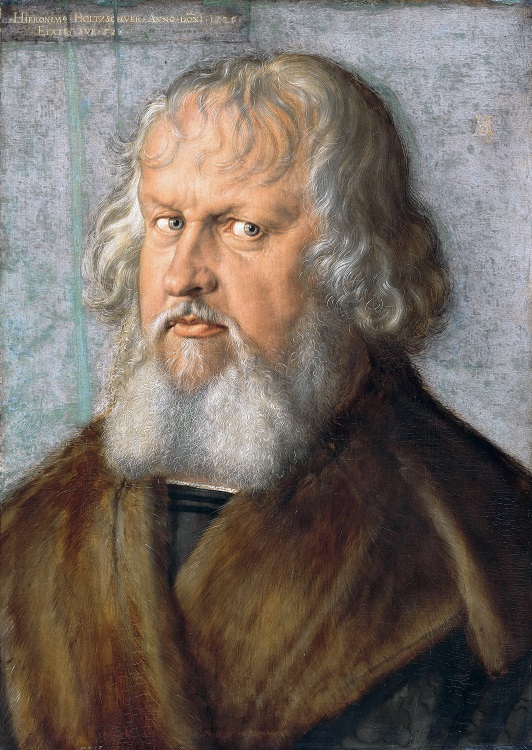 the marvelous drypoint etching of St. Jerome in the Wilderness... 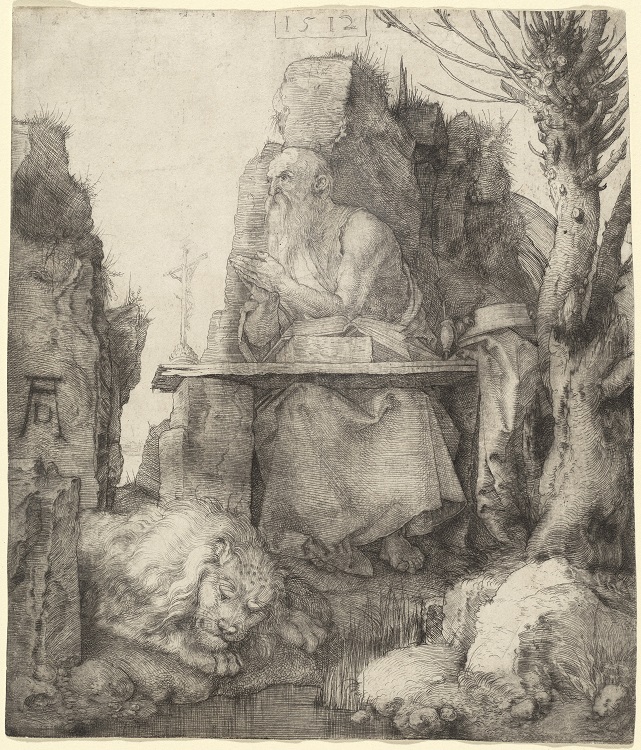 the Portrait of a Cleric... 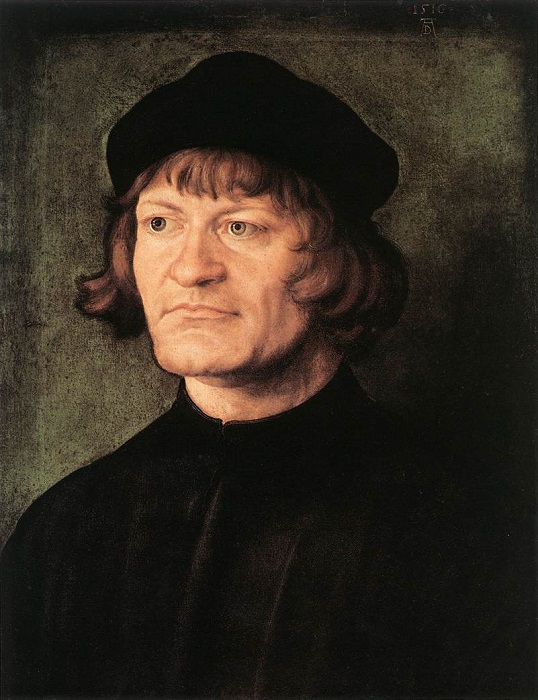 and the exquisitely sculptural Four Apostles: 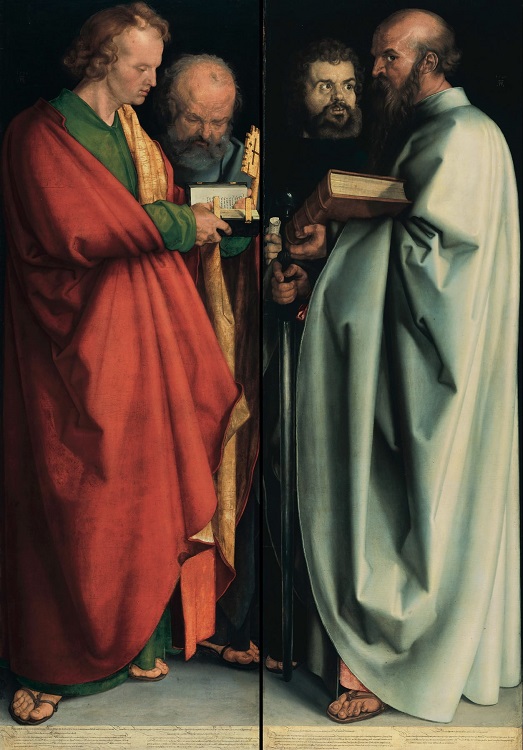 These are but a mere few of Dürer's paintings, prints, and drawings. Like many other Renaissance artists, he was incredibly prolific... in spite of his early death at age 56. Unlike many Renaissance artists, a great majority of his works have survived over the centuries.

Of course I knew of Dürer, looked at his work more when I tried out silverpoint a while back. You made me realise I barely scratched the surface, and a more in depht look is called for. Something for the long dark winternights...
J

you are right Stlukesguild, thank you very much for this wonderful post.
Incredible already the work of him when he was 13 years old.

These are beyond incredible works. I have no words, really.
N

Dürer was one of the most influential artists on me during my formative years as an art student... and before. The prints had the biggest impact and led me to embrace the emphasis upon line. My love of his work led me toward minoring in print where I focused upon woodblock prints (far more crude than wood engraving) and eventually pointed the way toward other Renaissance print artists such as Hans Baldung Grien, Martin Schongauer, and Lucas van Leyden, the German Expressionist woodblock artists, Munch's prints, Japanese woodblock... and other artists who emphasized line such as William Blake. 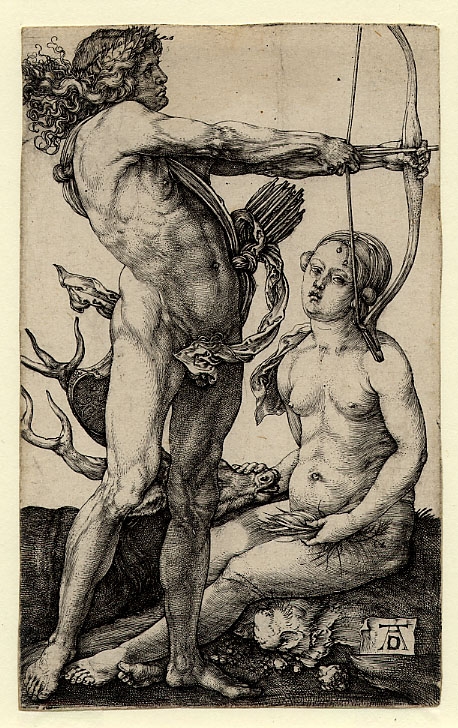 wonderful, prints are something wonderful and fascinating.
T