A Piece by My Littlest Sister

She was known during the wild west days of WC Debates, when we were both forum guides, as victorialis. Even among the many bright people there, she stood out. She passed away at age 62 on July 15 of cancer, leaving a hole in my life that will never be filled.

Her primary creative activities were writing and music (in which she had a BA), but she was a dab hand with colored pencil, digital art and watercolor. She was a fantastic composer of great originality. Had her life gone a little differently, I have no doubt she would have carved out a niche for her music.

She left WC in 2006, after being diagnosed with breast cancer, taking only me with her. We knew each other for fifteen years, but never met in person. She and her husband lived in England, over 3000 miles away from my home in New Hampshire. We only started talking on the phone four months ago, when her second round of cancer took a turn for the worse. Except for those phone calls, it was all email. "We've never been in the same room," she once wrote to me, "and look how much that matters."

She was truly my littlest sister in all but blood. 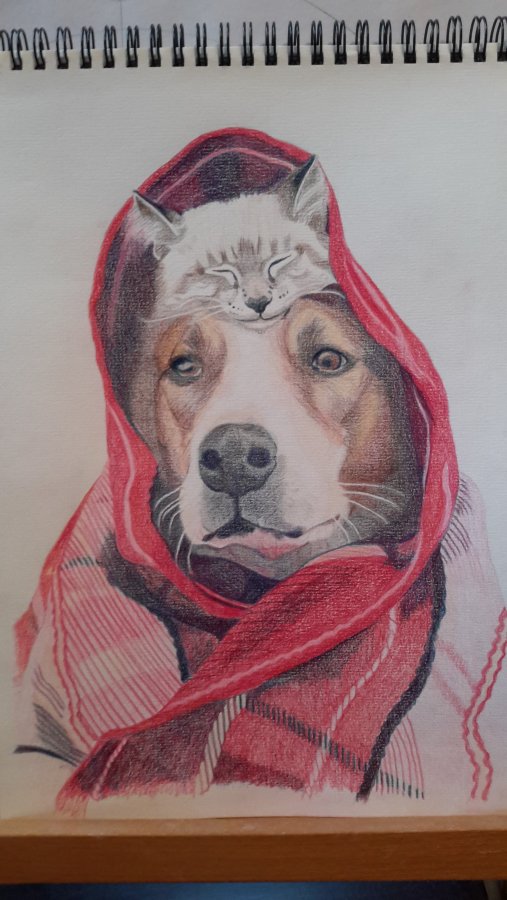 Tears in my eyes. That could almost be DD's dog and cat, 'cept they don't get THAT close.
Wonderful memoir. Thanks.

That is such an excellent work Musket. I am so sorry that you lost her so young. I understand the hole in your life

I'm so sorry for your loss musket. I know how close you were and I know how much you are hurting right now. My deepest sympathies and condolences! Please be good to yourself. It's wonderful that you celebrate her life, as she was a special person in millions of ways, especially to you.

XOXO I'd hug you if I could.

I can't resist just a little anecdote about her in Debates. Her style couldn't be pegged; her voice was consistently her own but she could deliver it in many ways (she used to say she could hear polyphony in the shower). Usually she was the soul of good comportment and got along with everybody, but on the rare occasions when she lost her patience with somebody, watch out.

Back then we had a member, who shall remain nameless, who seemed to be convinced he was the only rational person there. He harped on this with predictable regularity, how for five years he'd been trying to deal rationally with irrational people at WC. Finally she'd had enough, and decided to put an end to it once and for all.

Nowhere to run, nowhere to hide--

"If you insist on continuing to engage with people you openly deem irrational, or to whom you impute some other unfortunate deficiency, then with all respect: to me that's five years worth of evidence you're not rational either. Seen in the round, what's rational about such a pastime?"

She dealt with her disease with courage and grace, and never lost her mischievous sense of humor. She's free now.
Last edited: Jul 27, 2021

Sorry about the loss. It's no comfort, but we all experience loss and somehow most of us learn to move on. Nothing but the best of wishes for you.

One more. She was always an optimist, one of her most endearing personality traits to an old cynic like me. I don't remember who was on the receiving end of this or even the subject of the thread, but I'm glad it wasn't me. I'm good with words, but she was in a different league. She never edited her posts (or her writing in general). To come up with something like this off the top of my head... no way.

Point 3 of the occupational hazards, coming completely out of left field, cracked me up so much I saved the post. I didn't know her yet; the first PMs were yet to come. Who is this person?

If your trade is fear and dire warnings, there are a couple things you need.

1. Lots of people with yankable chains, so they will harken unto you and serve as your market.
2. Life never getting any better and not a flippin' thing going well (to enable the development of new and improved dire warnings).
3. An enjoyment of the dysfunctional, so you can endure both the heavy lifting of finding new things to be disgusted about, and the boredom of banging on about the old stand-bys like greed, sloth, covetousness, etc.
4. A powerhouse eschatological mythos to house it all, because people will want to hear more about the end of the world.
5. Utter indifference to humanity, including your own.
6. The presumption that your market is not too clever, and that you know better than they do.

Occupational hazards of being the Voice of Doom:

1. Getting paralysed with fear.
2. Self-sabotage, up to and including suicide, due to the first hazard.
3. Partying gets a lot harder.
4. The temptation to be insincere in one's dire warnings, to protect oneself from the other occupational hazards.
Last edited: Jul 27, 2021
J

Musket, I am very sorry for your painful loss, condolences.
The work you posted is fantastic, wonderful and subject, very sweet and also nice.
An extraordinary artistic talent and also very multifaceted, beautiful stories you wrote, she must have been a fantastic person and with a very fast brain.
Your relationship is beautiful and important, as you really say a strong and wonderful person.
A warm greeting

We had done a little PMing, just guide talk, when a PM from her showed up in my Inbox with the subject line "From the None of My Business Department."

"I get the feeling you've been sitting shiva for someone close to you. I won't broadcast it, but I'm keeping an extra special thought for you."

Of course she couldn't have known that my family isn't religious, but in fact, my father had died three weeks before. I had mentioned this to no one at WC, not on the public board, not in a PM. I asked her how she could possibly have known. She said there was nothing magical or mystical about it, that she'd just been watching me. I went back over every post I'd made on the board for the past month and could find nothing different from my usual style. Whatever it was she detected in my language, I couldn't see. One hell of an opening conversational gambit. What if she'd been wrong? I still have no clue how she did it.

Not long ago I told her I couldn't shake the feeling that we had been brother and sister for a thousand years, that this wasn't the first time for us, nor would it be the last. I've never believed in reincarnation, and there are many facile psychological explanations, but I still couldn't shake it. I didn't hear from her for a few days so sent her a quick message saying well, maybe it was just momentary madness and some things are better left unsaid.

"No," she wrote, "it's cool that you said it. I recognized you immediately all those years ago, or I would never have taken the risk."

Two digital pieces by her, from around 2008. the First is titled "Phoenix Man." The second, "Hongzhi Tanzanites." 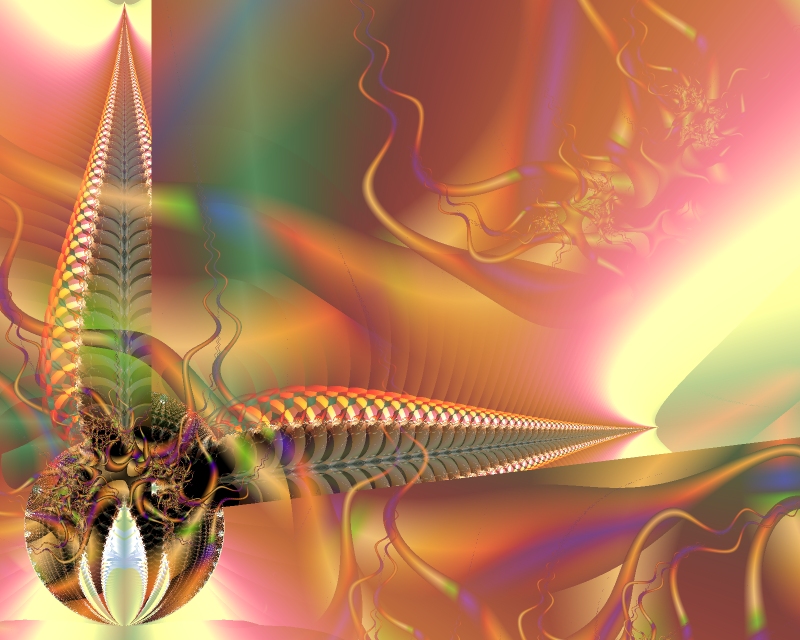 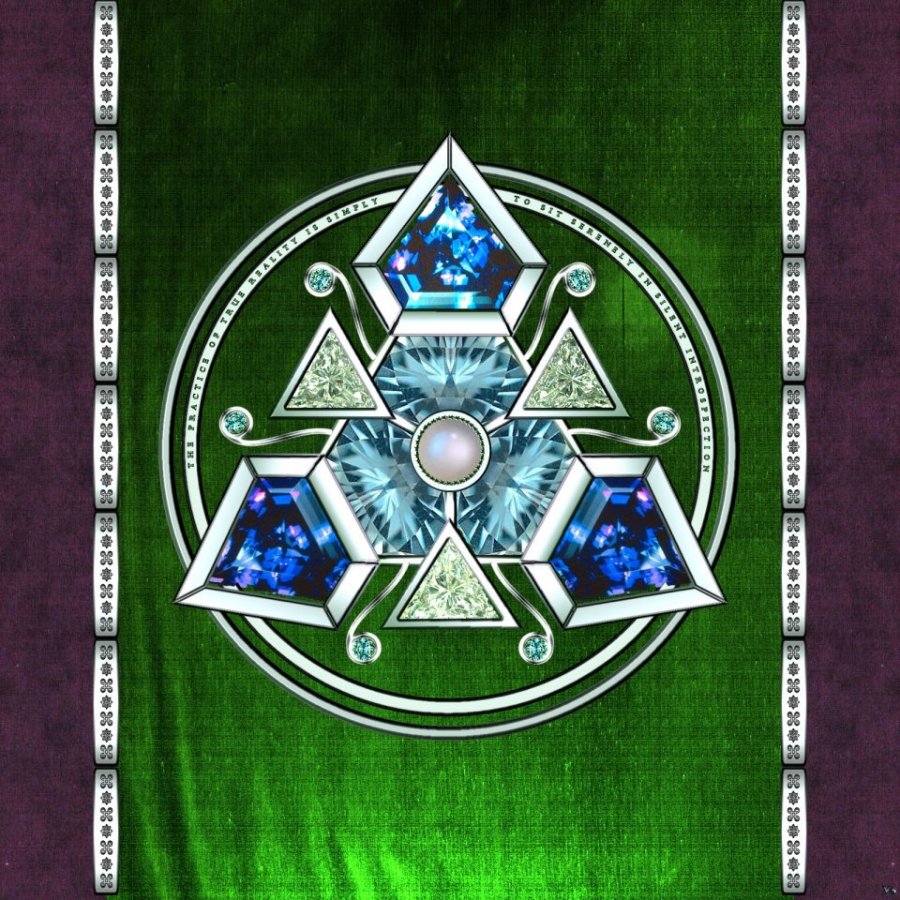 The quote from the Chinese Chan Master Hongzhi reads, "The practice of true reality is simply to sit serenely in silent introspection."

Thanks again to everyone for the condolences.
Last edited: Jul 28, 2021

Wow! Those digital works are intense!

Anybody who thinks anchovies are an essential ingredient in a recipe for meatloaf is bound to be intense. Yuck!

Sorry for posting them here instead of in Digital; I'm kinda discombobulated. If you want to move them, Arty, I'll just write a brief explanation and refer people to this thread for more info if they want it.

Thanks again to everyone.

Musket, are extraordinary works, with digital he created magic as well as colored pencils, even in these 3 works what you said emerges, you can appreciate his immense talent.
thank you for sharing so much beauty and telling a little about the person who is just as great. thank you very much
H